Reform and Backlash: What Europe Can Learn from Latin America

In November, the backlash to externally imposed austerity once again boiled over. Labor unions executed coordinated strikes. University students took to the streets. Daily life came to a halt as citizens protested grinding reforms. The harsh economic restructuring was demanded by the International Monetary Fund (IMF) and backed by the regional hegemon as conditional for assistance needed to survive a sovereign debt crisis. The protests soured leading to hundreds of arrests, a handful of deaths and sporadic rioting.

This story may sound familiar. But it does not refer to the November 14th, 2012 austerity protests that shook Madrid, Rome and Lisbon. Rather, these November protests occurred in 1991. And they occurred on the other side of the world, in Venezuela.

Within three months of those 1991 protests, a young army officer named Hugo Chávez would stage a coup against the pro-IMF Venezuelan government. The coup failed, but the popular backlash would continue, eventually ushering Chávez to power in 1998. He has since entrenched his anti-austerity philosophy into government policy. 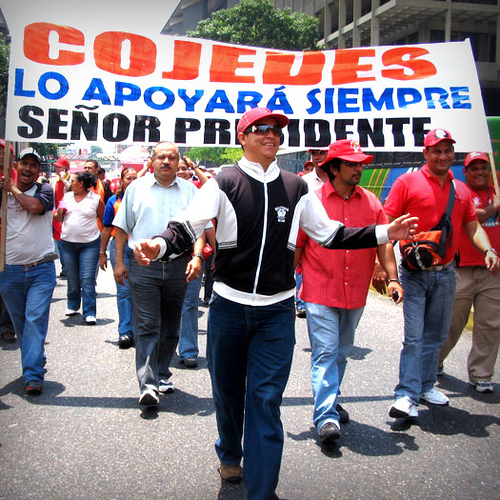 Whiplash – After experimenting with IMF-led austerity, the Venezuelan populace rebelled against externally enforced restructuring. Urban support remains strong for Mr. Chávez, the man who rolled back reform. (Photo by Nicholas Laughlin and published on Flickr under a CC BY-NC-SA 2.0 license)

Roughly 30 years prior to the current European sovereign debt crisis, much of Latin America trudged through its own inability to meet international debt obligations. From Mexico in the 1980s to Spain in the 2000s, the histories are eerily similar. Both regions benefited from irresponsible lending to pursue debt–led growth. In both cases, the lending financed excessive consumption as opposed to long-term growth oriented projects.

Given the circumstantial similarities, scholars and policy makers alike have scrutinized the Latin American debt crisis for lessons relevant to Europe. However, the focus is often purely on the economics – how to structure a haircut, for example, or, perhaps, the utility of a currency devalue.

As opposition to austerity continues to mount in Europe, the political lessons of the Latin American debt crisis may prove just as salient.

In the 1980s and 1990s, nearly all Latin American countries turned to the IMF for relief. To satisfy preconditions for assistance, many of these countries were forced to adopt structural reforms devised by the IMF and supported by the United States of America.

These reforms, featuring trade liberalization, privatization, and labor market flexibility, reflected developed-world prescriptions for ailments to Latin American economies. Countries throughout the region adopted these policies formed in the IMF and the United States Department of the Treasury, mostly to maintain access to official funding and international capital markets.

Known collectively as the ‘Washington Consensus,’ these neo-liberal economic reforms were essentially enforced upon Latin American countries. Eventually the imported policies provoked a backlash as many citizens ultimately rejected an economic approach imposed in a moment of weakness by more powerful agents.

This distaste helped sweep a series of left leaning politicians to power at the turn of the 21st Century. In fact, the South American countries that experimented most aggressively with Washington-oriented reforms are precisely the countries that have since drifted furthest to the left. In Venezuela, Argentina and Bolivia, once poster children of the Washington Consensus, voters have persistently preferred presidents who have promised to rollback neoliberal reforms

A Lesson for Europe?

Greek protests are becoming more frequent, and more violent. Could austerity fatigue in Europe produce a similar backlash as in Latin America? (Photo taken by Endiaferon and published on Flickr under a CC BY-NC-SA 2.0 license)

Like Latin America, peripheral Europe initially accepted the international prescription for solving their debt-crisis. Just as ‘Washington Consensus’ styled leaders assumed power in Latin America in the 1990s, so to have ‘Brussels Consensus’ leaders taken the helm throughout debt-ridden Europe. From the Iberian Peninsula to the Aegean Sea, a new crop of European leaders has emerged prepared to implement fiscal austerity and structural reforms, just as the Euro-core and the IMF have demanded.

However, if Latin America is any indicator, Europe’s persistent stagnation and high unemployment rates could prove fertile ground for a backlash against reform. In fact, throughout peripheral Europe, the notion that austerity has been foisted upon them by outside organizations such as the IMF, or countries, such as Germany, has given rise to nationalistic movements that reject restructuring.

In Greece, anti-austerity candidate Alexis Tsipras came within three percentage points of winning the right to form a government in Athens. In Italy, support for Mario Monti’s ‘Brussels Consensus’ styled government has dropped from 54 percent in November 2011 to 32 percent in November 2012. In Spain, the austerity backlash has threatened the very integrity of the nation as Catalonia has demanded independence rather than continue under Madrid-led reform.

As Hugo Chávez’ experience illuminates, the tide may not turn immediately, but it can turn definitively. As long as Europe has paused to consider the economic lessons of the Latin American debt crisis, it would do well to consider the potential political lessons as well.

1 Response to Reform and Backlash: What Europe Can Learn from Latin America