Of Dictators and Democrats

I love a good story about authoritarianism as much as the next person, but Kurt Weyland’s recent tome in the Atlantic riled me up in a way that a bookish political science piece hasn’t in a long time.

In a long and somewhat drawn-out fashion, Weyland paints a Latin America that is becoming less democratic, succumbing to those charismatic populist tendencies of yore. He also conveniently and neatly draws the continent into two buckets: safely democratic and not safely democratic.

(To be fair, he doesn’t project the labels on Paraguay, much of Central America, or the Guyanas – I’m just assuming silence means authoritarianism.)

I’m not here to defend crazy economic policy, or the megalomaniacal tendencies that Weyland accurately portrays in his article, rather my beef is this pesky idea in American academic and policy circles that macroeconomic orthodoxy is a prerequisite for a democratic government, or that Latin American governments will continue to emulate American and European democracies in their continued political evolution.

Many in these circles believe that the economic redistribution prevalent in the policies of Chavez, Correa, Morales, and even Fernandez de Kirchner are tantamount to authoritarianism. In this worldview, responsible fiscal policy, regardless of the consequences or the exclusion of the poor in the short- to medium-term, is the path to prosperity and a sure sign of democratic consolidation.

Correspondingly, populist leaders treat opponents not as adversaries in a fair and equal competition, but as profound threats. Branding rivals “enemies of the people,” they seek all means to defeat and marginalize them. Turning politics into a struggle of “us against them,” populists un­dermine pluralism and bend or trample institutional safeguards.

Populist leaders treat opponents not as adversaries in a fair and equal competition because, in the minds of many Latin Americans that have been excluded and shut out of economic relevance, it has never been a fair and equal competition. It’s no coincidence that these so-called models of consolidated democracy, Chile, Brazil, and Colombia in particular, boast some of the highest income inequality rates in Latin America, much higher than their “authoritarian” cousins in Argentina, Venezuela, or even Ecuador.

A fabulous study from academic standard bearers Nancy Birdsall, Nora Lustig and Darrell McLeod supports this view, and I’ve pulled a few of the charts below to illustrate the Gini comparisons between our two groups of Latin American countries. The GINI coefficient isn’t perfect, but it’s indicative. 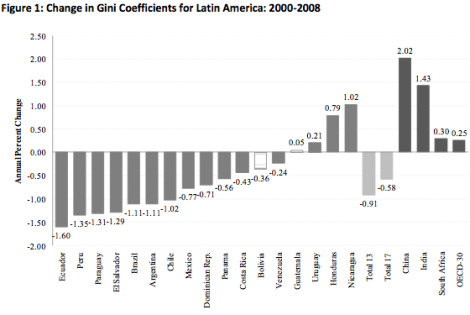 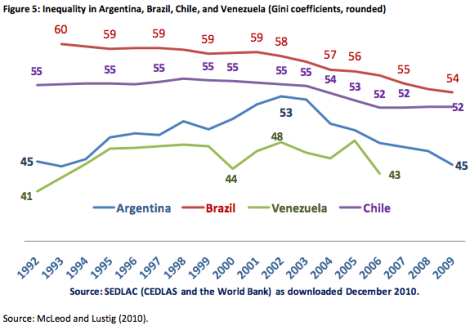 So, surprise! Sometimes redistributive “authoritarian” democracy actually redistributes wealth. And sometimes people actually vote for that outcome. To be fair, Weyland doesn’t like right-wing populism either, but he seems to think it’s preferable to the current wave in Latin America.

Populism, whether of the left or the right, is a threat to democracy. Yet in Latin America today, the graver and more sustained danger is coming from the leftist variant.

Democracy, unfortunately, doesn’t work the way people like Weyland would like it to. This is particularly true in Latin America, where income inequality, and how to address it, is the main feature of economic and political life. Of course voters see their short-term needs at the primaries when they go to the polls, and by opening the floodgates for all to vote (including all the dirty tricks that can come with this), the probability a leftist populist can get their message across is quite high. Combine that with a history of strong executive leadership in Latin America, and a darker history of caciques, virreyes, and latifundistas, and this is bound to keep happening.

So how does this craziness happen? And why does it keep happening? Weyland, of course, is principally peeved by Chavez, and the way his democratic election crept towards unsavory outcomes over time:

Chávez and his supporters, along with some academics and intellec­tuals, claimed that Venezuela had become a participatory democracy. Common citizens, so long neglected by traditional politicians, could at last have a direct say in their own governance. There is some truth to these claims when it comes to local decision making and social-program implementation, but they are unconvincing as applied to the crucial arena of national policy making.

Even Weyland admits the “truth to these claims”! If you were a lower or middle class Venezuelan, and you just came out of a system whereby for thirty years governments went back and forth via a pact between the two main parties, enriching those connected into the system but shoving the hoi polloi to the side, wouldn’t 1998 Chavez seem like a breath of fresh air? Of course, history tells us that, instead of creating a flourishing multi-party system like he promised, he consolidated his power personally and ran economic and political opponents into the ground, all while redistributing Venezuela’s incredible oil wealth.

But that’s democracy! Messy things happen, and it seems to me that there are too many folks in the room pushing their view of democracy as one where the only acceptable outcome is one that doesn’t mess with economic policy. This is why folks abroad were terrified of Lula before he was elected, then in love with him once they realized that he wasn’t out to redistribute income on a massive scale. Fast forward to 2013, and Brazil’s middle class is rioting in the streets because of the messy way that income has been divided in boomtown Brazil. Things weren’t much different for Peru’s Ollanta Humala in 2011.

I guess I’m angry about Weyland’s argument principally because it draws this dichotomous line between “democratic” Latin America and “authoritarian”-trending Latin America without correctly representing all the nuances that exist in between. One thing I’ve never loved about political science is the tendency to try and create a measurable hypothesis with people with political feelings and lives far away from your own.

There’s no answer to Weyland’s question in my mind except to recognize that we, as external observers, should be looking at Latin America as a group of independent, sovereign countries with individual political and social histories with a right to self-determination. Maybe a new type of democracy is emerging that we can’t classify or fully comprehend, and one that reflects the unique nature of individual political systems and countries. An American calling this “authoritarianism” is condescending and dangerous, particularly when a plurality of local voters thinks differently.

James Stranko advise the Clinton Global Initiative on Latin America and is the Editor-in-Chief of Avenida America. Follow him on twitter @extranjero

5 Responses to Of Dictators and Democrats