Posted on January 7, 2014 by Mancha Contributor

Filmmaker Marcos Moura on the documentary “Rio de Fé”, which he co-directed

The first Latin American Pope’s first visit to Latin America last July was seen globally as a “roaring success”. Photos of hundreds of thousands, if not millions attending mass in Rio de Janeiro blew up facebook and twitter feeds around the world. But what did it mean for Brazilians? And how was it seen in Brazil?

The film shows the Pope’s recent visit on the occasion of World Youth Day, which was held in the city of Rio de Janeiro between 23 to July 28, 2013, bringing together 3.5 million young Catholics from all over the world

Over 60 days of shooting from five teams of young filmmakers working simultaneously in ten different languages and with more than 100 hours of captured material, “Rio de Fé” is a documentary that shows the confluence of the Marvelous City and the message the Christian faith wants to convey though the prism of five themes: the church, the foreigner, the city, the slum and other religions.

A Trailer from the New Film

A Major Theme of the of the Film is Religious Tolerance

Looking at the film as a whole, one of the things that stand out is the importance given by the Pope to the empowerment of the laity in the church. Seeking proximity to the faithful and dispensing with the typically strong security apparatus, he goes out of his way to bring the church closer to the people, distancing himself from a pervious model in which the hierarchy and rituals of power were clearly defined and rigidly enforced.

This message was underscored by the Pope’s the messages on fighting religious intolerance. During his trip, Pope Francis met with leaders from other religions, even ones not that prominent. How could the Pope have come to Brazil and not spoken with the “Povo do Santo” (people of Afro-Brazilian religions)? How could he have simply ignored the fact that many Catholics in Brazil also practice religions of African origin?

Had he done so, it would have reveled major inconsistencies with the new priorities of the church. 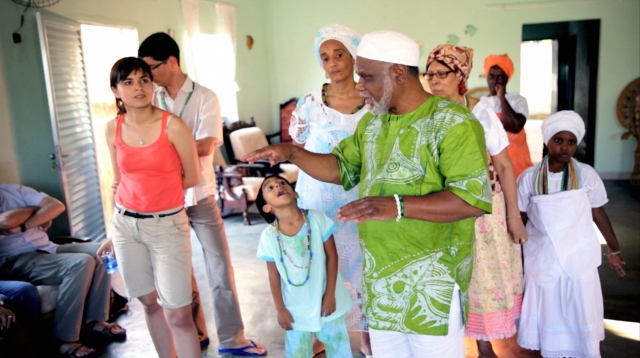 Even the Church’s most conservative wing realizes that now is the time to seek a better understanding of the second Vatican Council, which implies the adoption of new ideas and practices. The fascinating thing is that those who have always resisted change in the past are now advocated this opening.

“Rio de Fé” depicts the possibility of multiculturalism and coexistence in a country, region or any place with different ethnicities and traditions.

A central character in the film’s discussion of religious tolerance is Babalaô Ivanir dos Santos. Supported by the media (Brazil’s dominant Globo network) he organizes the “Walk in Defense of Religious Liberty”, attempting to raise awareness of religious intolerance in Rio de Janeiro. His movement gained headlines for uniting various religious and ethnic groups as well as for developing partnerships with public institutions and media companies around the theme of intolerance.

The walk appears as one of the activities of the “Commission for Combating Religious Intolerance” which was created after a series of articles published by Journal Extra, entitled “Enemies of the Faith”, which reported the expulsion of priests from the Afro-Brazilian Umbanda and Candomblé religions from their neighborhoods by drug traffickers influenced by Neo-Pentecostal pastors.

With the support of different religions and ethnicities, the Commission has built a political movement based on confronting religious intolerance and recognizing rights related to religious freedom, while demanding the government punish crimes resulting from religious discrimination or prejudice.

In this sense the film speaks to all those who seek respect, which, in this case, is defined as the opposite of religious intolerance.

So far so good