Brazilection 2014: Heating up after the Cup

The race tightens as the campaign heads down the stretch reports Brazilian political analyst João Schlüter in the second installment of his series on the elections (Pt. 1 here)

The Brazilian presidential campaign has been rather quiet as of late; after all futebol is more important than politics to many Brazilians. Now with the Copa behind us, the election will stake center stage, and all eyes will turn to the first-round vote scheduled for October 5.

Let’s see what the state of things is now:

Will the outcome of the World Cup affect the elections?

The short answer is no. The long answer is mixed. The Cup was a clear success for the incumbent President Dilma Rousseff, until the devastating defeat of the seleção by Germany in the semifinal.

Up till then, the athletic side was fine (Brazil advanced ) and the organization of the cup ran smoothly, far exceeding (albeit very low) expectations. In the lead up to the cup, not just the international press but also Brazilians had their doubts about whether the event could be pulled off. “Imagina na copa!” (“imagine during the cup!”) became a meme for all that was wrong with Brazil (especially traffic) and expected to be much worse during the event. As the event went rather well, now “lembra na copa” (“remember during the cup”) may have a different meaning.

Brazilians feared their country could be exposed during the World Cup. It was not.

On the athletic side of it, there is actually little evidence that success at World Cups influences elections. Brazilian elections have been held in World Cup years since 1994 and there is pretty much no case where a cup could have swayed an election.

In the 1998, 2006 and 2010 elections incumbents (or chosen successors of the same party) won, even though the Brazilian team did not do well (which in Brazil means winning). In 2002 by contrast, Brazil won the cup but the candidate of the government party (Jose Serra, PSDB) lost to Lula. So yes, Brazil winning the cup might have given an extra boost to Dilma, but the seleção’s collapse probably won’t be a decisive factor if her campaign falters.

So if the World Cup can’t undo Dilma, what could?

That could be the short answer here, except maybe it is not. The economy is performing quite poorly and this should be Dilma’s biggest weakness at this point. Growth this year is now expected at just 1 percent, inflation has recently breached the upper bound of the target range (6.5 percent) and even job creation, long immune to sluggish activity has slowed to a trickle in recent months.

So clearly the opposition has plenty of ammunition to attack Dilma on the economic front. The question is will it work. The average voter probably doesn’t pay close attention to the latest economic data. The argument the PT is making is that the vast majority of Brazilians are much better off today than they were when the PT took over in 2003. Indeed this long term view is quite positive, with wages up, unemployment and poverty down and inflation much more controlled than in the years before.

The fact that much of this progress was made in the Lula years (2003-2010) and progress has slowed under Dilma will only reinforce the PT strategy to present Lula-Dilma as a team and joint project.

Maybe this is not a valid argument, as one would have to consider a non-PT counterfactual over these 12 years, but validity doesn’t matter. What matters is if the PT can communicate it effectively and if voters will buy it, and this we will see in the coming months.

Official campaign advertisement on TV will start on August 19th and could have a crucial role in shaping the election.

This represents opportunity for the challengers because many voters still don’t know much about the opposition candidates. Almost a fifth of the electorate (19 percent) don’t know Aécio at all, and a majority (56 percent) of the electorate don’t know him better than hearsay. For Campos it’s a whopping 75 percent with 41 percent having never heard of the former Pernambuco governor.

Dilma, however, will have the advantage of having much more airtime at hear disposal than any other candidate. This is because under Brazilian election rules, airtime is not bought but provided for free and split according to a formula much accounts for the seats of each candidate’s coalition in parliament.

Of the 25 minutes of daily broadcast Dilma with her coalition of PT, PMDB and a bunch of smaller parties will have almost half (12 minutes) with Aécio and Campos far behind (4.5 and 2 minutes respectively) and about one minutes each for the minor candidates.

A quick look at the recent polls

There has been fairly little movement in the first round polls since May: Dilma remains in the 30s, Aécio at about 20 and Campos still in single digits. In the latest Datafolha poll of mid-July, Dilma’s support translates to 50 percent of the valid vote, which is exactly what is needed to avoid a run-off.

Much like Fred – not a lot of movement here

In the second round simulation however, things appear to be tightening: Dilma’s lead is cut to 4 points (44 to 40) over Aécio (and 7 points over Campos). This is within the margin of error (+/- 2 points), so the election is essentially a tossup at this point. 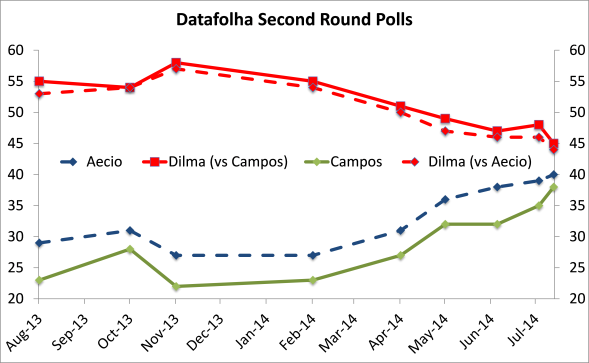 The latest scandal is that, apparently Aécio, as governor of Minas Gerais, spent R$ 14 million of tax money building an airport on his uncle’s land and near his grandmother’s house. The airport is not officially open but is in fact operated (informally) by Aécio’s cousin and regularly receives Aécio when he visits grandma.

Folha de São Paulo, a respected opposition-leaning newspaper, first broke the story and now lawyers for both camps are all over it.

This of course comes while other cases of corruption and misconduct such as the Pasadena refinery case are ongoing and both sides are using whatever they can to make the other side look bad. There will be plenty of dirt to throw around this season; the question is if any of it will stick with the voters.