Venezuela: Can the revolution survive with a little help from its friends?

Posted on August 6, 2014 by Mancha Contributor

Love at first sight? Yes I’m certain that it happens all the time.

The enemy of my enemy is my friend.

That is probably what crossed Hugo Chávez’s mind when he awarded the Orden del Libertador – Venezuela’s highest distinction – to none other than Muammar Gaddafi, Bashar Al-Assad, Mahmoud Ahmadinejad and Vladimir Putin.

After all, these individuals have been among the top rivals of the United States, Chávez biggest ideological adversary. But when the same order was awarded to Xi Jinping earlier this month we are no longer talking about flirting with the enemies of the west to win the world’s sympathy.

We are talking business.

Some of the the best friends of the Bolivarian Revolution.

Xi Jinping’s visit comes in a time of need for Venezuela.

The country’s continued reliance on oil exports and import of basic goods is exerting a great toll on it’s economy. While government officials insist that there is no foreign currency crisis, there has been a continuous fall in Venezuela’s international reserves. The nation’s liquid reserves hit a historical minimum in September 2013 and has barely recovered since, while the amount money in circulation continues to rise. The result? An inflation rate of over 60 percent and a great shortage of many goods.

The last years have certainly not been years of “vacas gordas” in Venezuela. Source: Banco Central de Venezuela.

Retailers such as Zara, a clothing store, restrict the entry of customers  as well as the number of items that can be purchased. Customers start queuing as early as 4:00am to enter shops and tickets are handled to allow access on a first come first serve basis. These tickets are often resold on the street to the highest bidder.

Finding sugar and other staples is a daily challenge in Venezuela.

More recently, the country’s refusal to convert airlines profits from local currency to US dollars (the total amount currently tied up in Bolivares is US$3.9 billion) has resulted in the suspension of ticket sales in Venezuela as well as major cuts in foreign airlines’ service to the country.  American Airlines reduced flights from 48 to 10; Delta from 7 to 1; Air Canada, Alitalia and Lufthansa have discontinued service to Caracas entirely . The list goes on.

Airlines and households are not the only ones taking a hit. Major companies such as Coca Cola, Procter & Gamble and Colgate-Palmolive have also reported loses in the order of millions of US dollars due to the government’s foreign exchange policy.

Venezuelans studying English abroad have had their access to foreign currency blocked in the middle of their stay and were forced to return.

Since President Maduro took over last year, Venezuela has requested 16 loans from the international community – around one loan per month -. Meanwhile, its oil production has dropped since 2003,  despite official sources saying the opposite.

So how and when will Venezuela payoff this debt?

Herein lies the importance of Chinese President Xi Jinping’s visit last month, which led to the signing of 38 agreements between China and Venezuela. The agreements include a new loan of over US$4 billions, to be repaid with oil and other oil derivatives. Venezuela in turn made a commitment to increase its oil exports to over one million barrels per day by 2016, which means almost doubling its current quota of 640,000 and, according to analysts, reducing exports to the US.

This makes Wikileaks reports that China sells part of that cheaply bought oil to the US at higher prices particularly interesting. 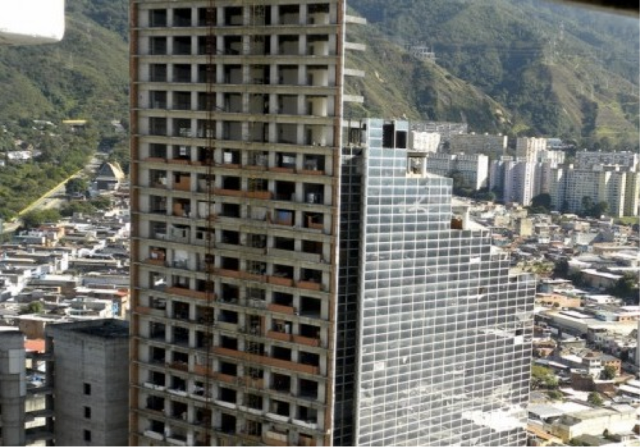 The acquisition of the Torre David – the world’s tallest slum – by a Chinese consortium is a strong signal of the Venezuelan commitment to the relationship with China. The government had promised for years not to evict the families living there.

Sino-Venezuelan relations have never been this good. The number of bilateral agreements jumped from 20 between 1974 and 1998 to over 400 since 1999. Since the creation of the Joint Sino-Venezuelan fund, China has lent over US40 billions dollars to Venezuela. China is also participating in the construction of major railways and housing projects, cement and petrochemical factories and has launched two satellites to help with planning, agriculture and disaster recovery.  There are also military ties, including two squadrons (24 planes) of Chinese-built Karakorum-8 trainer jets and ground radars.

On a lighter note, Venezuela’s military band struggles through a rather rough rendition of China’s national anthem.

Is relying on China the answer to Venezuela’s woes?

Certainly not. Venezuela is not the first country in the region to make the mistake of depending on a foreign country for its economy. The most emblematic case is that of Cuba, whose economy crashed immediately following the collapse of the USSR. Famine haunted Cubans, oil imports dropped to 10 percent of pre-1990 amounts, the country lost approximately 80 percent of its exports and imports and its gross domestic product dropped by 34 percent.

While comparing the relationship between Cuba and the USSR to that of Venezuela and China might seem exaggerated – the nature and context of their ties is very different – relying on foreign assistance is not going to help the South American country solve its problems. And any cut off from imports could have drastic consequences for the population: currently, Venezuela is one of the countries relying the most on food imports in Latin America.

Venezuela needs to stop depending on foreign loans and imports and start rebuilding its economy.

Swapping flags and colors is far from being a real solution.

Any solution for Venezuela’s woes would have to start with deregulating the economy. The foreign currency exchange controls, a major source of corruption, needs to be dismantled or reformed.  The Bolivar is one of the most overvalued currencies of the world.

It’s been this way for eleven years since the restrictions on the purchase of foreign currency were first put in place. There is little to no incentive for foreign investment. Prices regulations and reoccurring attacks on the private sector continue to shrink the national economy. One does not simply have the army occupy shops to pave your way to securing re-election.

Can the revolution really get by with a little help from its friends? There certainly is love at first sight. But the love between Venezuela and China is far from being a real and healthy; it has got the makings of a dependence disorder.

Right now, Deng Xiaoping’s advice is the best thing China has offer to Venezuela: “It doesn’t matter if a cat is black or white, so long as it catches mice.”