Posted on September 9, 2014 by Mancha Contributor 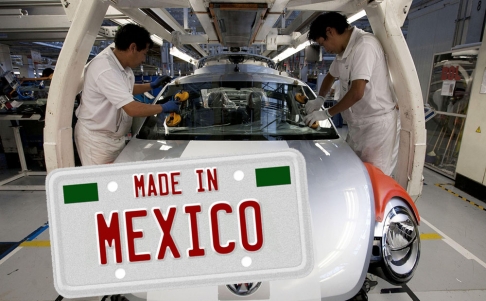 Mexico’s automakers have produced more cars and light trucks than Brazil’s for the third straight month, closing in on pole position after more than a decade in the Samba nation’s rear-view mirror.

Mexican carmakers built 2.1 million units through August 2014 compared to Brazil’s 1.95 million. Though slight, the lead will likely extend through 2014, given falling Brazilian auto production and the prospect of a prolonged recession in Brazil.

Much has been made over whether this latest turn – Mexico last surpassed Brazil in cars produced in 2002 – is a broader sign of the two countries’ diverging fortunes: with Brazil skidding into recession, Mexico’s economy is revving – albeit in a low gear, with growth hovering around 2 to 2.5 percent.

In many ways, the two countries’ auto industries are symbolic of two distinct approaches to growth and development.

Mexico’s export-oriented auto industry, grounded in free trade agreements and low tariffs, has expanded by 50 percent since 2010, helping to keep growth afloat amid falling oil exports, while Brazil’s carmakers, producing primarily for the domestic market and protected by a web of tariffs, have built 25 percent fewer cars compared to the same period in 2013. 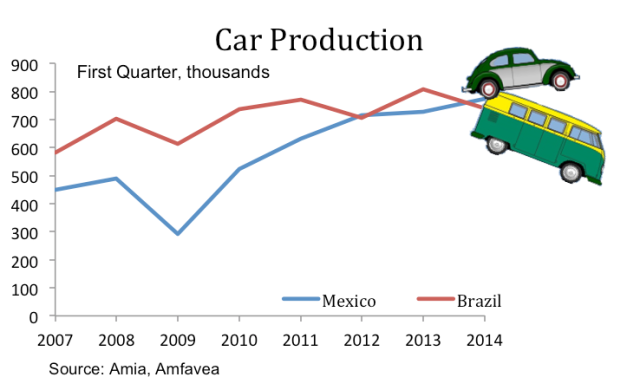 Though two countries don’t usually compete face to face – Mexico exports more than 80 percent of its production to the US – the growing competitiveness of Mexican carmakers has concerned Brasilia to the point that the country threatened a 35 percent tariff on Mexican auto exports to Brazil in 2012.

To avoid the charge, Mexico’s government agreed to limit exports to US$1.45 billion a year, mere centavos compared to auto exports to the US, totaling US$70 billion in 2013.

On the surface, there is some case for auto-envy. Brazil’s government has tried just about everything to boost industrial competitiveness, devaluing the real and forcing electricity generators to charge cheaper rates.

Meanwhile Mexico, buoyed by a perfect storm of rising Chinese wages, cheap U.S. natural gas, and an emerging US economic recovery is on track to displace Brazil as the world’s seventh largest car manufacturer.

Yet at least some of this progress can be chalked up to Mexican carmakers themselves: Mexico’s automakers are now more productive than their Brazilian counterparts (according to a recent McKinsey study, about twice so), and are rapidly scaling the value chain. 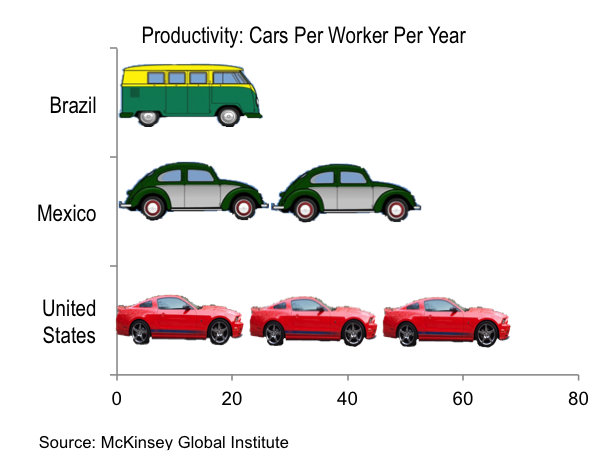 Over the past year, Audi, BMW, and Daimler AG have broken ground on state of the art plants in Veracruz and San Luis Potosi – far from the traditional car-making hub of Puebla or the maquilas of the north.

Nevertheless, as much as this may be a tale of two markets, in one glaring respect, the two industries look an awful lot alike – both depend on a single market for more than three quarters of their sales.

If the US economy does sneeze, Mexico’s carmakers will need more than anti-freeze to ward off a cold.

Jesse Rogers is an energy analyst focusing on natural gas markets in Latin America. He previously worked as a finance and politics reporter for Impremedia and as a research assistant for Mexico City’s Centro de Investigación y Docencia Económicas (CIDE).