Posted on January 4, 2015 by Mancha Contributor

Jesse Rogers continues No Se Mancha’s preview of 2015 – a crucial year for Mexico.

2015 will be the year that makes or breaks Mexico’s reform agenda. A global crash in oil prices, heightened financial market volatility, and serious questions of corruption and legitimacy confront Mexico’s leaders. The wave of goodwill that delivered the presidency to Enrique Peña Nieto in the fall of 2012 is washing out, and the historic reform pact between Mexico’s three main political parties is now broken. This combination of international and domestic challenges will make 2015 a critical year for the country and  the Peña Nieto administration, which will become a lame duck in 2016. Certainly, there are some very big things to watch out for, and at least one upside risk:

The Oil Price Crash – Mexico’s Congress revised its 2015 budget with a lower target oil price of $79 per barrel. Yet oil set to fall below $60, further spending cuts are inevitable. The key question is how and where.

Peso volatility – After dropping $200 million on a single day to defend the peso, how far will Agustin Carstens’ Bank of Mexico go? And will markets view the intervention as credible, or will investors gear up for an all-out assault on the peso?

Violence and Corruption – After promising to shift the government’s approach in Mexico’s drug war by emphasizing citizen security, the Peña Nieto administration now faces a swelling protest movement accusing it of turning a blind eye, at best, to the kidnapping and killing of 43 students in the rural settlement of Iguala. Swelling protests and growing distrust of Mr. Peña’s administration threaten to push back the reform timetable past 2015, leaving Mr. Peña significantly weakened as the country looks to new presidential elections in 2018.

A Burgeoning Economic Comeback? In spite of it all, 2015 may be the year of Mexico’s economic comeback. The country is the single Pacific Alliance member with a manufacturing export platform comparable to the East Asian Tigers. As factory orders pick up in the U.S., expect Mexico’s growth to swell. 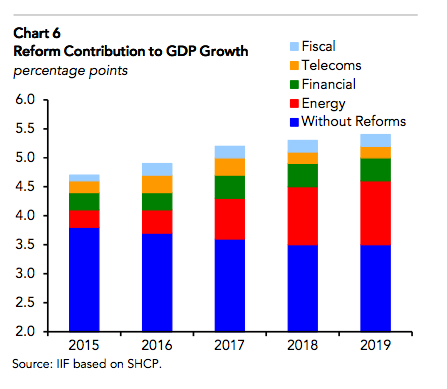 Growth spurring reforms – what will they add up to?

Lower oil prices present severe complications to the government’s ability to fund itself, and ultimately, to free state oil firm Pemex, or Petroleros Mexicanos, from the ward of the state. Transfers from Pemex account for one third of total government tax revenue. Although Mexico’s Congress recast the 2015 budget with a lower oil price target, additional cuts are likely, putting further downward pressure on domestic demand. Oil price hedging will help offset some of the damage to government coffers, but if international oil majors continue to cut back on investment, Mexico is unlikely to realize the reform’s much-touted 1-2 percent bump to GDP growth for some time.

Markets on the Fritz

After striking at the heart of Brazil, emerging market financial turmoil has now reached Mexico’s shores. On December 11th, Mexico’s central bank spent $200 million defending the peso in its first foray into currency markets since 2012. Although Mexico is plagued by few of the problems facing Brazil – namely high inflation and twin fiscal and trade deficits, the peso has taken a beating in recent months. Much of this is due to the peso’s status as one of the most widely traded emerging market currencies – with more investors willing to hold pesos, volatility inevitably rises.

Yet moves to tamper peso volatility will divert work on critical financial sector reforms, especially those aimed to increase access to credit for small and medium sized businesses. The problem is larger than it might seem, as low access to credit fuels Mexico’s large informal labor market, where productivity is lower and corruption thrives. With bank credit as a share of GDP among Latin America’s lowest, expanding access to credit is key to boosting domestic demand.

Nothing to Fear But…

Serious questions of corruption have led to a national crisis of confidence, from the massacre in Iguala to the first lady’s purchase of a $7 million mansion from a close patron of the Peña administration. Now, Luis Videgarray, equal parts finance minister and chief diplomat, has suffered a blow to his credibility following the revelation of gifts including a million dollar home from the very same source. How and whether Videgarray, who has earned the adulation of international investors for turning the country’s reform fervor into results, bounces back for this scandal will do much to determine the country’s progress in the coming year.

Although Mexico’s growth numbers continue to disappoint, the country bears the distinction of being Latin America’s chief export platform for manufactured and high tech goods. Mexico’s autoworkers are twice as productive as their Brazilian peers, while unit labor costs in many industries are now lower than those of China. Surging U.S. GDP – now growing at 5 percent, should provide some consolation, reinvigorating Mexico’s manufacturing base. With the next election cycle kicking into high gear post-2015, if there were ever a time to move Mexico forward, it is now.

Jesse Rogers is an economist with Moody’s Analytics. His expertise is in international monetary policy and natural gas markets in Latin America. He previously worked as a finance and politics reporter for Impremedia and as a research assistant for Mexico City’s Centro de Investigación y Docencia Económicas (CIDE).