Despite much of Latin America reaching the bicentennial celebration of its independence movements, much still remains unresolved in the way of territorial disputes. In a dispute that dates back to the 19th century, Costa Ricans and Nicaraguans continue to debate the ownership of Isla Calero, a swamp area of just three square kilometers. Just three months ago, the International Court of Justice in the Netherlands granted Nicaragua an additional 120 square kilometers of oil-rich territorial waters, while recognizing Colombia’s sovereignty over the islands of San Andres, Providencia and Santa Catalina. Land-locked Bolivia’s territorial losses during The War of the Pacific (1879-1883) continue to place it at odds with Chile as it seeks a an alternative way to export natural gas.

In a sign of Latin American solidarity, many Latin American countries have publicly expressed their support for Argentina in its conflict with the United Kingdom over the Falkland Islands, or Islas Malvinas, as they are referred to in Spanish. Argentine Foreign Minister Hector Timerman traveled to London this week, in order to meet his counterpart William Hague. The meeting never occurred due to the UK’s insistence that the islanders take place in the negotiations, a prerequisite Timerman staunchly rejected, citing a UN resolution which refers to the issue as a bilateral issue, which precludes any other parties from participating.

Timerman, in what could only be described as a “hail mary” diplomatic offensive, instead used the opportunity to make a series of incendiary, and potentially, counterproductive remarks, making the possibility of any negotiations during Prime Minister David Cameron’s tenure seem as distant as the 14,000-kilometer trip from London to the Islands. To conclude, Timerman mentioned in an interview with the BBC that it would not take more than 20 years for Argentina to achieve sovereignty over the islands.

3 things Hector Timerman probably should not have said, or done, regarding the Islands.

1-Not accept the UK’s prerequisite for a meeting- Timerman repeatedly mentioned UN resolution 2065 in order to justify his refusal to meet at the negotiating table. While the resolution does state the dispute exists between both governments, it also states these negotiations should take place, “bearing in mind…the interests of the population of the Falkland Islands.”

Not only did Timerman not accomplish his intended goal of having negotiations over the islands, but in an existential-type confusion, he also stated, “Falkland Islanders do not exist,” while also stating, “Falkland Islanders are Argentine citizens.” If the latter holds true for Timerman, then they should take part in deciding their future. If the former holds true, then one could consider the negotiation a bilateral one.

2-  Hector Timerman: “The United Nations  is very clear. Self-determination applies to a native people, not to people that have been implanted. According to Timerman, very few people have been born on the islands, a statement that has been repeatedly contradicted by the Falkland Island government.  As a result, Argentina refuses to accept the future results of a referendum to be held in March over the future of the islands.

3-Create a Twitter Account. Regarding the referendum, Hector Timerman “tweeted,” “#UK is violating #international law by denying #Argentines on mainland right to vote on #Malvinas referendum. This is human rights issue!” In summary: “Mainland” Argentines should vote alongside Falkland Islanders that do not exist, but are concurrently Argentine citizens.

No, I’m serious-there is no such thing as a Falkland Islander.
(Image Source: http://www.guardian.co.uk)

Why the Increased Offensive?

Argentina will hold legislative elections in October, in which one-half of the members of the Chamber of Deputies, and one-third of Senators will be elected. President Cristina Fernandez de Kirchner has already managed to lower the voting age from 18 to 16, which significantly increased the amount of eligible voters within an age range, it is believed, that favors Kichnerismo. The recently increasing diplomatic efforts to “retake” the islands are, undoubtedly, part of electoral efforts to incite nationalism among the voting populace.

While Argentine efforts have been ongoing for decades and did not start as economically motivated, the recent discoveries of significant amounts of commercially viable sources of liquefied natural gas and oil around island waters has also rekindled the Argentine cause. Last April, Argentina nationalized YPF-Repsol, a subsidiary of Spanish oil giant Repsol, after having to import fuel for the first time since its privatization. Occasional power outages and increased demand for energy consumption have also not helped. Timerman has not wasted time in stating, “UK interest smells too much like petroleum,” and has threatened to seek action against oil exploration companies in the South Atlantic, the first of which are set to produce oil by 2017. 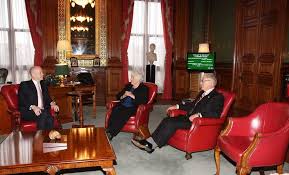 William Hague and the islanders were kind enough to leave an empty chair for Timerman
(Source: en.mercropress.com)

The Islands, through their official governmental site, promote themselves as “self-governing” and “self-sufficient,” while providing a historical timeline and supporting documents that in no way help the Argentine claim (Note: please check their twitter account for competing tweets during Timerman’s visit to London). While it is outside the scope of this article to take a stance on the legality of Argentina’s claim, a brief look at the history will lead most to reach their own conclusions. Argentina can certainly not afford to continue pretending it has a bargaining position, and should accept any future offers to discuss the matter if it intends on achieving any concessions from the UK.

Meanwhile, someone please give Mr. Timerman a script to follow.