While the Colombian government and FARC guerrillas slowly make progress in their peace talks in Cuba, a dormant conflict is at risk of remerging in Western Boyaca, the heart of central Colombia’s emerald production. The April 4 death of Victor Carranza, Colombia’s “Emerald Tsar,” has challenged the atypical “green peace” pact struck in 1993 by rival emerald bosses. The agreement, reached with no government intervention, put an end to decades of violence that left as many as 6,000 people dead.

Now the Emerald Tsar is gone. Will the rest live in peace? Rival bosses have promised that the truce will still hold but Carranza’s death has put the region at risk and reflects how fragile “peace” is when the state decides to delegate its peacekeeping role to its more deadly enemies.

Today, the government has a chance to step in and make amends for its neglect two decades ago.

The story of the emerald industry in Colombia is far from precious.

Just as with land ownership in this Andean country, emeralds profits have benefitted the few who take advantage of a poor and long-ignored population—peasants that have had no other choice but to surrender to the will of those who have controlled the region for decades.

In Muzo, a municipality of the emerald region, 75 percent of the population lives off the mining industry where miners are paid by their findings. No emeralds means no money. The price for stealing a stone can be death.

Beyond degrading working conditions, residents of Western Boyacá have suffered the war of emerald lords. The bloody story goes back to the 70s, when the green war started as a result of different emerald dons trying to maximize power in the exploitation of the green gem. By the early 1980s, drug dealers came into play as the emerald territory became appealing to cocaine traffickers. Later on, the dispute would involve guerrilla and paramilitary forces given their interest in land control. The multiparty conflict has translated into the presence of death squads across and beyond the region, selected murders, vendettas, and mass graves. It is estimated that by the time the emerald lords called for peace in 1993, more than 6,000 people had died as a result of this war.

The One that Got Away

All along, powerful  emerald and cocaine dealers dropped like flies (see the death of  Gacha ‘The Mexican’ and of the ‘Godfather of emeralds’),  but one always managed to survive: Victor Carranza. Victor Carranza discovered his first stone in Muzo Boyaca in 1960. By the age of 26, he had already obtained the license to explore and exploit the mines in Muzo. His legend grew quickly. He stumbled across the biggest emerald in the word, a discovery that opened international doors for the young dealer. By the time of his death at 77, he controlled 40 percent of the emerald production in a region that produces an estimated US$120m a year.

How the tsar managed to outmaneuver colleagues and drug traffickers remains controversial. Up until his death, Carranza faced accusations for his links to the paramilitaries, which he allegedly financed in order to secure control of the business and to keep the FARC off his land. Mass graves were found in his properties and his name remains in the top of the suspect list for the murderer of Leonidas Vargas, a drug dealer and fierce rival in the Meta department, one the most violent regions of Colombia.

Hear from Carranza himself in this documentary:

However, Carranza was also a key figure in the 1993 regional pact.  Back then, the main owners of the emerald business agreed to a cease fire that guaranteed peace in the region. The Colombian government was not a player at all in these dialogues: the belligerents hammered out the deal themselves with the help of the Catholic Church.

The pact ended the wave of violence that had besieged the region for decades. During that time, the Molinas and the Beetars families – the other main owners of the emerald industry- along with Carranza controlled  the entire of the emerald business. Carranza never held a majority of production – his stake accounted for 40 percent of the total – but his name became a synonym of authority among peers, patrons and peasants.

Such was his power that half an hour after his death, the patrones of the industry issued a statement in which they ensured that there would be no intention of breaking the ‘green peace’ pact of 1993.

But unlike emeralds, talk is cheap

Carranza’s death does challenge the 1993 pact. Experts in the business believe that the Carranza group is fragmented, and new paramilitary groups are coveting Carranza’s share of the business. Moreover, even in the times of peace, violence never disappeared. Carranza himself was a target of spectacular murder attempts on multiple occasions that involved rockets and military tanks. The absence of Carranza combined with  the weak role played by the state in the region creates a yawning power void. Antagonist groups are likely to fight to fill it.

Do you see what happens, Larry? Carranza’s car was destroyed in this assassination attempt

So where is the state?

And why has it done so little for the citizens trapped in the emerald country? This question has lingered since the advent of the ‘green war’. The previous “peace” existed only because the emerald stake holders negotiated it—the state played no role. Beyond ineffective, the state appears downright complicit. All the investigations conducted against Carranza were absurdly precluded or remained unconcluded for years, and were so until the time of his death.  To add insult to injury, most of the land that Carranza owned was acquired through the Agrarian Reform in in the early 1980s through which the state sought to provide land to landless peasants.

Even more disturbing is the oblivion in which the state has left his citizens in these areas. The municipalities involved in the emerald industry have seen little state services. The state-owned Banco Agrario does not even have an ATM in Muzo. This is quite surprising for a bank that has a presence in the most violent areas of Colombia. The truth is that Muzo is understood as no-man’s land. Working conditions from the previous century prevail. The municipalities see little of the royalties of the emerald business, most of which get lost in the hands of corrupt politicians. 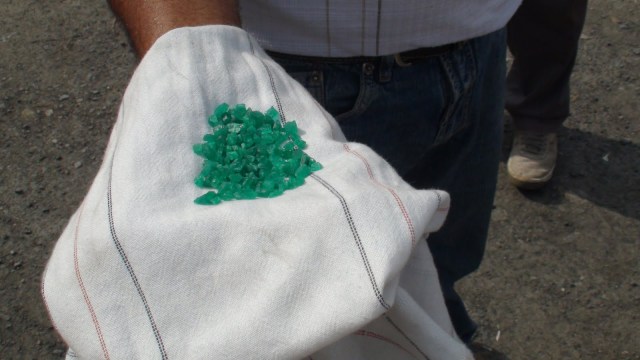 In the wrong hands?

In the midst of this troubling situation, the Colombian state does have the opportunity to play the role it should have been playing all along: that of peacekeeper.  The government must be present in the region.  It must address the citizens’ needs. It is the government’s duty to ensure that the state benefits from mining activities and, even more importantly, that its citizens benefit in terms of better education and health services. Necessity pushes people to accept terrible working conditions in the emerald industry. With better education and smart public interventions, people from Western Boyaca will have better chances of finding better jobs.

These may seem like giant, vague goals, but there are sensible ways to start, beginning with addressing Carranza’s extensive properties. The Tsar’s land is estimated at over 2m hectares. With  Carranza’s death, his titles should be the object of extensive investigation. This is particularly important in the context of the land restitution that Colombia is currently trying to achieve and that can certainly be a valuable card to play in the negotiations with the FARC in Havana.

However, the government must develop a strategy to avoid the usual wave of violence that any attempt of land redistribution has caused in Colombian history. It is a difficult problem, but its Colombia’s problem. Rather than outsourcing war, peace and labor to the caudillos of the green rocks Colombia must reclaim its own.

It is time for the government to stop turning its back on Western Boyaca.

Who will sit in Carranza’s throne?