Justice in Guatemala: Dealing With Dictators

Posted on June 7, 2013 by Mancha Contributor

Aging strongmen move slowly. But are the wheels of justice even slower?

Now is not a good time to be a retired dictator. The past decade has seen a wave of prosecutions of once-untouchable ex-military leaders, as both national justice systems and a growing body of international jurisprudence increasingly reject the impunity once afforded to former strongmen.

Most recently, Guatemalan General José Efraín Ríos Montt, who took power in a military coup in 1982 at the height of Guatemala’s 36-year civil war, is facing charges of genocide, brought against him in his own country.

The inculpating evidence is truly frightening. According to the testimony of survivors and the investigations of the UN-sponsored Historical Clarification Commission (The Comisión de Esclarecimiento Histórico, or CEH), some 200,000 people lost their lives over the course of the conflict. The war displaced another 1.5 million out of a population of less than 15 million.

The CEH was able to name more than 42,000 victims, including 23,671 killed in arbitrary executions, and 6,159 forcibly “disappeared”. (That chilling euphemism, the more terrifying for its ambiguity, is one of Latin America’s most unfortunate contributions to the 20th century.) These numbers represent but the tip of the iceberg. 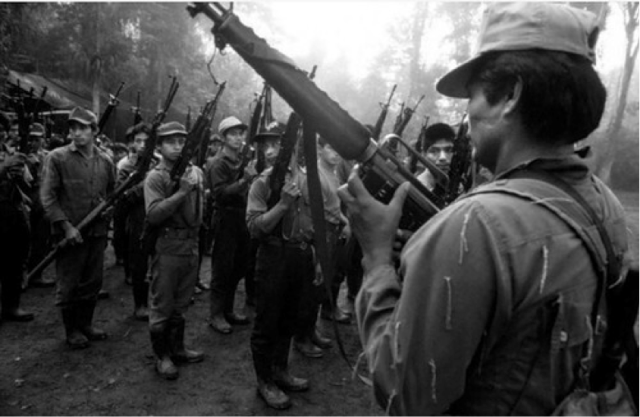 US tax dollars at work

Ríos Montt did not begin the state terror – rather, he inherited and intensified it.

The Guatemalan conflict had burned since 1960 – or even, as some argue, since 1954, with the US-backed overthrow of President Jacobo Arbenz. But the 1980s saw a bloody intensification. Beginning in 1981, the military launched a total war against the civilian population in a renewed effort to stamp out an insurgency embedded in the rural Mayan highlands.

Code named Operación Ceniza – Operation Ashes – military and paramilitary forces methodically swept the countryside, engaging in mass slaughter of indigenous civilians, the burning of entire villages, forced displacements, and the destruction of crops, animals, and other supplies of potential use to the guerrillas. (Click here for a This American Life podcast documenting one such massacre—and its sole survivor)

When Ríos Montt assumed power in March of 1982, many observers actually held out hope for a more humane counterinsurgency. The previous regime had been too brutal for even the Reagan Administration, but the US hailed this new government as a turning point and promptly renewed military aid.

US embassy officials supported the Guatemalan military’s spurious claims that the rebels were responsible for the massacres in the countryside, and by 1983 Assistant Secretary of State for Human Rights Elliot Abrams went on record to assure the public that “the amount of killing of innocent civilians is being reduced step by step.”

This certainly sounded reassuring. Unfortunately, as was too often the case with the Reagan Administration’s dealings with Central America, a more violent reality lurked behind the comforting words. The CEH report found that 81 percent of all the war’s documented human rights violations occurred between 1981-83. The report also found that the Guatemalan state was responsible for 93 percent of those abuses. The guerrillas, while not blameless, were responsible for just three percent.

In 1982 alone, there were at least 18,000 state killings. This included the infamous Operación Sofia, a sustained campaign of extermination focused on “subversive elements” – a category which included the entire civilian Ixil population of El Quiché department. Operation Sofia’s explicit ethnic targeting was central to the CEH’s conclusion that the Guatemalan state under Ríos Montt pursued a deliberate policy of genocide.

The Wheels of Justice – Slow Moving? Or Stuck in the Mud?

Despite the overwhelming evidence, it took until 2013 for the Guatemalan justice system to catch up with the General. The saga of how this came to be shares much in common with other countries in Latin America – and around the world – that have struggled to reconcile with their traumatic pasts.

Ríos Montt currently sits on trial in a Guatemala City courtroom on charges of genocide and war crimes, but for years he enjoyed legal immunity by serving in Congress. Before that, justice was thwarted as the civil war dragged on inconclusively until the signing of the United Nations-brokered Accords of Firm and Durable Peace in 1996. As part of the peace negotiations, Guatemala passed the National Reconciliation Law, which granted amnesty for grave political and war crimes on both sides of the conflict. However, it also allowed for exceptions in the case of torture, genocide, and forced disappearances – a small window, but one big enough for the crimes of the regime’s highest leadership.

The slow crumbling of impunity in Guatemala echoes similar cases in other Latin American countries like Chile and Argentina – and, while it takes place in the domestic court system, it also reflects the importance of the growing international legal infrastructure for prosecuting war crimes and human rights abuses.

In Chile, General Augusto Pinochet seemed an unlikely candidate for prosecution. He remained a powerful figure despite his defeat in the 1988 plebiscite. The military had been able to take advantage of the democratic transition to secure its place in Chile’s institutions, including granting Pinochet the status of Senator-for-Life – and the prosecutorial immunity that went with it. Supremely confident in his immunity, there was no way that he could have foreseen being arrested in the UK, of all places – home of one of his staunchest defenders, Margaret Thatcher. 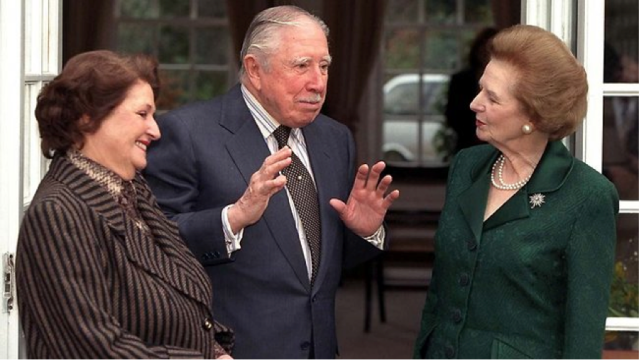 Pinochet & Thatcher: One of the Iron Lady’s Less Savory Friendships

The Long Arm of the (International) Law

Yet, astoundingly, that is what happened.

In 1998, British authorities arrested the traveling caudillo under the authority of an international arrest warrant issued by Spanish judge Baltasar Garzón for Pinochet’s alleged role in the torture and murder of Spanish citizens in Chile. He was eventually ruled unfit to stand trial for health reasons and released, but not before Britain’s highest court declared the warrant, and the extradition request, legitimate under both international and domestic British law.

Despite a triumphant return to Chile, the international warrant dogged Pinochet and led to renewed efforts to prosecute him in his home country. In 2004, a judge ordered him into house arrest, and in 2006 the Supreme Court stripped his immunity. Pinochet ultimately died that year before facing judgment, but a precedent had been set.

In 2010, Argentina followed suit, revoking a 1990 pardon of the ex-dictator Jorge Videla and opening the way for his subsequent conviction for torture and grave human rights violations. Videla had been pursued by a German court for his role in the disappearance and death of a German national, which spurred the domestic court into action.

Whereas Pinochet escaped justice, Videla recently passed away in ignominy, caged in a Porteño prison.

In both of these cases, the international warrants bolstered the arguments against domestic immunity, and created legal and political momentum for prosecution. And since 2002, when the International Criminal Court (ICC) entered into force, the precedent for universal jurisdiction – that is, the idea that some crimes are so heinous that they can be prosecuted anywhere in the world – has only strengthened.

According to Jonathan Kuttab – a lawyer specializing in human rights and international law, and with whom I consulted on the role of international law in prosecuting war crimes – countries are increasingly likely to appeal to international institutions to ensure that these types of violations are prosecuted, despite the reservations of the likes of the US and China.

While ex-dictators could once reasonably expect to retire in comfortable exile, the prosecution of Ríos Montt and other similar cases send the message that, in Kuttab’s words, “torturers these days must hide their faces, hide their identity. Because they could be prosecuted anywhere.”

Former dictators are increasingly exposed for their crimes

But then, how does what happens in Chile or the UK – or Libya, where the ICC has indicted Muammar Gaddafi’s son, Saif al-Islam, for crimes against humanity – affect the proceedings in Guatemala City?

The answer is that if the Guatemalan courts are, in the end, incapable of giving Ríos Montt a full, fair trial, there are now international institutions, and bodies of international case law, capable of filling the gap. Guatemala’s domestic courts are notable for their courage in pursuing the case themselves, but especially now, while the case is still up in the air, the existence of a strong international consensus against impunity places pressure on Guatemala to get it right.

Unfortunately, the legal process in Guatemala appears to have been derailed. The tribunal found Ríos Montt guilty of genocide and war crimes on May 10. The Economist referred to the ruling as historic. The verdict was featured in major newspapers around the globe. However, within ten days of this ground-breaking ruling, the same newspaper’s carried minor article buried in the back pages containing dispiriting news: Guatemala’s Constitutional Court had stepped in to annul the conviction over a due process objection, and ordered the case retried.

Now, with the shocking ruling overturned on a procedural technicality, the future of the case is in jeopardy. No one knows when proceedings will resume, under which judges, or how such decisions will ultimately be made. Guatemala’s young judicial institutions, already weak, may not be able to resolve these conflicts.

Meanwhile, powerful domestic forces are speaking out in the ex-dictator’s defense. The current president, Otto Perez Molina, himself an army officer under Ríos Montt, has publicly denied the allegations against his former boss. The leading business association, CACIF, has argued that a genocide conviction will turn Guatemala into an international pariah, fomenting unrest and driving away foreign investment. These are not new arguments – it is instructive to revisit the CATO Institute’s hyperbolic warnings from 1998 that prosecuting Pinochet would threaten Chile’s “fragile peace” and lead to “terrorist violence.”

In truth, robust prosecutions are necessary to both reconcile with the past and to move forward into the future. True justice brings closure for victims and contributes to a national consensus on the inadmissibility of political violence. And convictions of the highest-ranking officials – whether in domestic, foreign, or international courts – provide an important deterrent to would-be tyrants while lending credibility to claims of equality under law.

Finally, while the Guatemalan people deserve a substantive ruling in the Ríos Montt case, the psychological impact of seeing him before a court is extremely powerful in and of itself. Civil society has responded forcefully to the proceedings, through demonstrations, vigils, public art, and social media campaigns, opening unprecedented space to air grievances and confront the past.

In Guatemala, as in Chile and Argentina, there is an undeniable poignancy in the spectacle of these frail old men, once fearsome and untouchable, sitting like any other citizen in judgment before their peers, to answer for their actions.

International law – like all law – is messy, subject to ongoing negotiation, and frequently politicized. But as Guatemala struggles to write the next chapter on human rights and accountability, we should remember that a world in which torturers and genocidaires must always live in fear of justice is much preferable to one in which they retire honorably from public service, grinning from behind their epaulettes and aviator sunglasses.

James McBride is an Associate at Blue Star Strategies, an international consulting firm that advises corporations, governments, and institutions on government affairs and investment strategies.

2 Responses to Justice in Guatemala: Dealing With Dictators