Posted on February 21, 2014 by Mancha Contributor

Caraqueño Francisco Rodríguez on the protests that have shaken his country 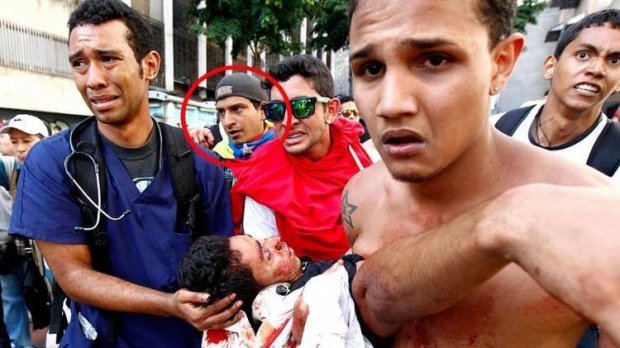 When Robert Redman woke up on the morning of February 12th, he never expected he would have to go through the ordeal he faced that day.

He never imagined that he would have to carry the corpse of Bassil Da Acosta, a student, shot down by members of the Bolivarian National Intelligence Center (SEBIN).

He never knew about the information blackout staged by the Venezuelan government; he never conceived that no Venezuelan TV channels would thoroughly cover the events of that day and that the signal of NTN24, a Colombia based TV-channel, and the only one continuously covering the news on Venezuelan cable TV, would be shut down by the government.

He certainly never thought that, after going back to his house, changing his bloodied clothes and going back to the streets later that night to carry on the protest, it would also be the last day of his life.

February 12 is known as Youth Day in Venezuela.

It commemorates the victory of the 1812 Battle of La Victoria in which the pro-independence forces, motivated by the shortage of troops, armed over a thousand students to defend the city of La Victoria against a superior Spanish army.

This year, that day was chosen to stage nationwide rallies in Venezuela in support of students who had been arrested earlier this month after protesting against insecurity—particularly after a rape attempt against a student on the campus of Universidad de Los Andes.

Since then members of the opposition have taken the streets to protest, starting one of the longest and most violent series of protests since 1999, the year when Hugo Chávez came to power.

While some rallies have been organized by the political parties, the protests are mostly spontaneous. Their nature is varied: in some places barricades have been set up to resist the police; in others students have organized “metrazos”—groups that board the metro to talk to the passengers—and other activities to inform people without access to information about what’s going on.

While insecurity is a major concern of the opposition—in 2013 alone at least 24,763 people were murdered—it is but one of the many problems Venezuela faces. Money-printing to finance public spending led to an inflation rate of 56.2 percent,  according to official sources in 2013. That is the highest in Latin America.

Necessities such as cooking and hygiene products are often hard to find on supermarket shelves. Even newspapers are on the verge of shutting down because they have not been able to acquire dollars to purchase paper.

Some members of the opposition believe that the only way out of the current crisis is a change of government, as soon as possible. While Nicolas Maduro was elected less than a year ago and the governing party scored a strong victory in municipal elections last December, there are several constitutional mechanisms which can be used to achieve this.

For instance, the “Referendo Revocatorio”, allows the public to recall elected officials after the first half of the latter’s electoral period has elapsed. Other immediate possibilities conceived by the proponents of an exit strategy (#LaSalida) include a National Constituent Assembly, which would lead to the drafting of a new constitution, or a Constitutional Amendment, which could require elections for some of the public offices.

Among the strongest proponents of #LaSalida is Leopoldo López, an economist with a Master’s Degree in Public Policy from Harvard University. He has advocated for street protests and neighborhood assemblies around the country to start paving the way for a new government.

Because of this, López and his political party, Voluntad Popular (VP), have been targeted by the government since February 12th. The headquarters of VP have been harassed twice in the last few days by policemen without any type of warrant and members of his party have faced prosecution.

López himself has faced charges from the government. Shortly after the rally of February 12th, the government issued a warrant for his arrest. The Maduro administration claimed that he is responsible for the wave of violence in the country.

After spending days in hiding, López turned himself in last Tuesday, accompanied by hundreds of thousands of supporters in Caracas. Although he claims he is not guilty, he decided to face justice and to prove his innocence in court. He remains deprived of his freedom in a military prison, awaiting trial, facing charges for arson, conspiracy and damages to public property. 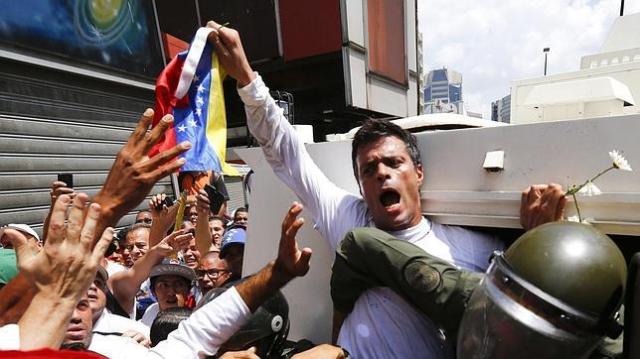 Leopoldo López turns himself in accompanied by a crowd of supporters. “If my arrest helps the people to wake up, it will be worth it”, he said.

Is violence part of the agenda of the government?

On the other hand, Henrique Capriles Radonsky, the opposition presidential candidate in the elections of last year, believes that #LaSalida has given the people false expectations. He has advocated a more cautious approach.

For Capriles, violence is the number one priority of the government. He claims that “if you read the newspapers, they don’t talk about the inflation, they cover the violence of the last few days…This serves the government to cover up the problems of the country. I believe (the government) is succeeding in their efforts”.

His claims are supported by the photo and video testimonies of demonstrators from around the country: tear gas canisters have been shot inside the apartments of people participating in cacerolazos (noisy protests), policemen have been recorded breaking the windows of cars in opposition neighborhoods and bands of armed supporters of the government on motorcycles have been harassing dissenters on the streets.

Francisco Ameliach, governor of Carabobo, is accused by the opposition of being responsible of the murder of Genesis Carmona, Miss Tourism 2013, after calling for a “fulminant counterattack” against demonstrators in Valencia on twitter. The tweet in which he does so was removed shortly after Carmona died.

Although Capriles states that people have the right to protest against the government, he insists that the efforts of the students would best be put on informing the people about what has happened and about the real problems of the country.

Members of the National Guard break the glasses of cars in opposition neighborhoods.

So what does the government say?

While opposition leaders believe that the government is responsible for the recent violence in the country, President Maduro claims that they are resisting a new coup d’etat attempt by the opposition, similar to the one of April 11, 2002.

However, no link has been proven so far between opposition leaders and members of the army, no arrests have been made and the High Command has reassured again and again their loyalty to the government.

President Maduro has also declared that there is direct US involvement in the protests and has gone as far as asserting that some opposition leaders were considering an assassination attempt against Leopoldo López to seek further destabilization.

Government spokesmen have also alleged that armed bands, financed by the opposition, have infiltrated opposition rallies and are responsible for the violence.

Juancho, the leader of a pro-government association was also murdered on February 12th. The culprit of this crime remains unclear, but President Maduro has linked the murder of Juancho to that of Acosta: apparently they were shot using the same gun by the SEBIN. 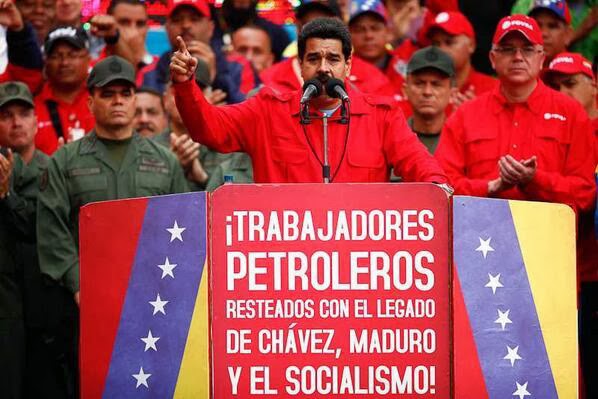 Nicolas Maduro addresses oil workers on Feb 18. “In this moment Diosdado (the president of the Congress) is driving his car to take Leopoldo López to a jail outside of Caracas”, he said.

Where is Venezuela heading?

It is very hard to tell what will happen in the coming days. The night of February 19 was one of the most violent there has been so far.

The opposition demands justice, including arrests of the people responsible for the murders, disarming of the pro-government militias and the release of all students who have been arrested.

They also want full investigations to disclose whether or not the police have tortured students: use of electrical shocks and sexual abuses—even one involving the use of a rifle—have been reported.

While the head of the Bolivarian National Intelligence Center was removed after President Maduro stated he did not follow his orders on Feb 12, the identified gunmen who shot Bassil Acosta and Robert Redman remain at large.

Meanwhile Leopoldo López remains under arrest awaiting trial, while his preliminary hearing occurred in a bus. Opposition leaders have called for rallies on Saturday to repudiate the arrest of López and the use of force against demonstrators.

The lack of media coverage certainly makes it hard to know what is going on. Because of this, Venezuelans have had no option but to use twitter as their main source of information.

President Maduro, for his part, has not shown  any willingness to allow for more freedom of speech. He has even threatened to shut down the transmission of CNN in the country if they do not change their broadcasts: “we will not accept war propaganda in Venezuela”.

This comes however, after a week in which he has used executive powers to force the media to transmit his speeches live. CNN, in turn, responded by staging a debate between pro-government and opposition students last Thursday night.

Where is Venezuela heading? Only time will tell. 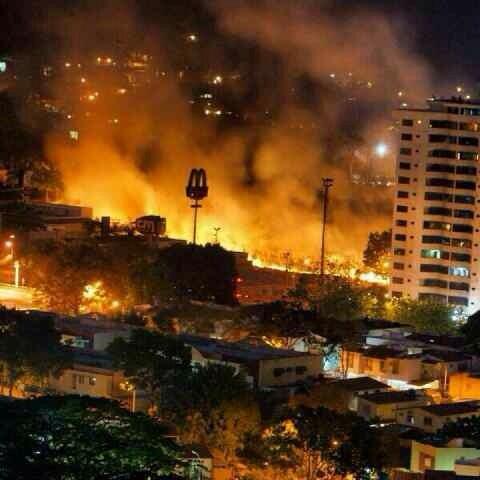 Valencia, the night of February 18

6 Responses to Venezuela on Fire