Deconstructing the Myth of Democracy in Venezuela

Posted on March 1, 2014 by Mancha Contributor

Caraqueño Francisco Rodríguez on the evolving situation in Venezuela

Shortly after No Se Mancha reported the Venezuelan government’s threat towards CNN, the press credentials of three of the channel’s reporters were revoked. This decision was made the morning after CNN Español staged a debate between pro-government and opposition student leaders (you can watch a Spanish-language summary of the debate here).

CNN Español anchor Patricia Janiot immediately left the country, but not without being harassed by Venezuelan authorities on her way out.

The measure lasted less than 24 hours as  President Maduro quickly changed his mind and said that they could stay, as long as they covered the news in a balanced way.  However, CNN is not the only international media agency having difficulties. Deutsche Welle, AFP and even Twitter have been targeted by the government.

María Gabriela Pulido, head of the Bolivarian Federation of Students and Youth, has been
the target of critics after she denied that there’s a lack of security, scarcity of food and attacks on freedom of speech on a live debate on CNN in Spanish.

Do regular elections equate to democracy?

Last December, for instance, municipal elections were held across the country, in which the PSUV – the government’s party – scored a strong victory, winning 240 out of 337 mayorships. However, the elected mayors in 49 of the municipalities newly won by the opposition were quickly stripped of their functions and stopped receiving their budgets.

The case of Caracas mayor Antonio Ledezma is particularly tellin. After winning the 2008 elections Ledezma had his budget cut by 90 percent and his workforce slashed from 17,000 to 3,000 workers. A parallel government led by Jacqueline Farías, a Chávez appointee, was set up immediately after the elections.

This measure was widely criticized as a policy to punish anti-government voters and as an attempt to sabotage the governance of opposition leaders. Ledezma protested by entering a hunger strike to demand that the national government release funds to pay the municipality’s workers. He was reelected last December as a gesture of defiance by caraqueños.

Caracas mayor Antonio Ledezma went through a hunger strike to demand that the national government release the funds to pay municipal workers.

Gerrymandering – the process of setting electoral districts to favor a particular party – is also practiced in Venezuela.

To many, this is the reason why, despite only getting 49 percent of the votes in the last legislative elections, the PSUV holds almost 60 percent of the seats in the Parliament. Analysts claim that the redrawing of the electoral circuits took away between 6 and 8 seats from the opposition, which accounts for a difference of 8 percent of the total number of seats.

Also worth remembering is the infamous “lista de Tascón”. The revocatory referendum allows publicly elected officers to be recalled after the first half of their period has elapsed. However to do this, 20 percent of the electors must sign a petition. In 2004, congressman Luis Tascón published the list of petitioners for the recall of President Chávez, a document known as Tascon’s list.

It has been widely reported that this list has been used to discriminate against those who petitioned for the referendum.

PDVSA, the oil and gas state company, is one of the most known examples: in 2006 Hugo Chávez removed “19,500 enemies of the country from the [oil] business” and demanded that they gave their posts to employees supportive of the government.

In case you are wondering why a congressman of the ruling party got access to the list, the National Electoral Council transferred this responsibility on the grounds that they did not have the proper funding.

Judging the quality of democracy in Venezuela based on the number of elections per year is like diagnosing cancer based on the looks of a person.

Venezuela: where party, military and government are all the same.

Picture for a second President Barack Obama in a compulsory TV and radio simultaneous broadcast, surrounded by the military, saying that Nancy Pelosi is safely driving John Boehner in her personal car to a military prison outside Washington, DC after he was arrested for rallying people in the streets to demand a new government.

This is, mutatis mutandis, how President Maduro announced the arrest of opposition leader Leopoldo López. Does that sound like real democracy to you?

It is not uncommon to find blurry boundaries between the PSUV, the military and the different branches of public power in Venezuela. In a country where there’s a permanent paranoia about a possible coup d’etat, perhaps because several of those who now rule the country actually participated in a military rebellion in 1992, the military is used by the government as a political arm.

Active members of the military  are increasingly being appointed to public posts (368 appointments in the last 9 months according to El Nacional newspaper), and they head 25 percent of the ministries. The motto of the government’s party (PSUV), “Patria, socialismo o muerte” (“Country, socialism or death”),  is widely used by generals when making public statements. The military even plays records of Chávez singing when dispersing riots.

President Maduro’s government has been good for the military

It is also not rare to find the judges of the Supreme Court chanting “Uh ah, Chávez no se va” (“Uh ah, Chávez is not leaving”), a pro-Chávez slogan, in meetings. Five times in the last fifteen years, the parliament has approved bills to allow the president to make laws by decree, despite the fact that the ruling party already controlled the parliament with an ample majority.

(Judges of the Supreme Court chant pro-government slogans in 2006)

The importance of the separation of powers in a democracy is debatable, at least according to Chief Justice Luisa Estella Morales. But it is certainly very dangerous to live in a society where one party, the justice system, the military and government are essentially all considered to be the same.

Has there been fraud in Venezuela?

Among the opposition there is a widespread belief that there has been fraud in the last elections. The electoral system in Venezuela is however automatic and has been verified several times by international observers. US President Jimmy Carter even qualified it as the best automatic electoral system in the world.

As of today no proof has been presented by the opposition to sustain their accusations. Esdata, a Venezuelan NGO has found some statistical irregularities in past elections, but they are not definite proof. Other organizations have questioned the quality of the electoral registry, though there is no evidence that it could favor the government.

There are claims however that the abuse of power by the government during campaigning is itself a form of fraud during the electoral process. Propaganda is commonly placed in public spaces (ranging from schools and hospitals to military garrisons), compulsory radio and TV broadcasts are used to cover the PSUV campaign, and government workers are forced to participate in rallies.

In an attempt to win votes from poorer voters in the elections last December, President Maduro forced companies to slash the prices of their merchandise. To enforce their compliance, he even used the military to occupy shops.

What’s even more troubling is that, during the voting procedure, electors are identified using their fingerprints right before voting. While theoretically a person’s vote is not linked to their fingerprint, this measure is widely believed to scare potential anti-government voters–particularly those who depend on the government for their jobs or who benefit from welfare programs.

Their fear is not unjustified: after the presidential election last year Maduro publicly said that the 900,000 chavista voters who voted against him had been identified.

How he obtained that information remains one of the mysteries of democracy in Venezuela. What is plainly visible is that despite ticking some of the boxes, Venezuela is far from being a true democracy. 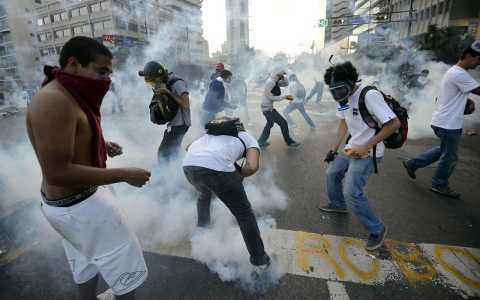 1 Response to Deconstructing the Myth of Democracy in Venezuela