Brazilection 2014: Don’t faint! This campaign is close and dirty

Posted on October 17, 2014 by Mancha Contributor

João Schlüter on the Brazilian presidential campaign as it hits the final stretch.

Dilma almost fainted after a recent debate (she recovered quickly)

Since the surprising outcome of the first round, a lot has happened as we speed towards the final vote on October 26. The race remains close and full of vitriol and memes, so let’s get right into it:

Aécio’s momentum is visible in the polls

The Aécio wave that saw him through the first round has carried him to a tight lead in the post-first round polls.

According to the Datafolha polls released since the first round, Aécio is ahead narrowly, well within the margin of error. In the poll released on October 16th, Dilma trailed the Tucano 43 to 46, with 6 percent still undecided and 6 percent planning to vote blank or invalid.

Another poll by Ibope found the exact same numbers. Of course, the question answered by this poll is not who will win the election on the 26, but rather who would people vote for on the day the poll is conducted.

Given the remaining time, the percentage of voters still undecided and the polls’ margin of error, all we can say with confidence is that this is a very close race.

Endorsements favor Aécio – but do they matter?

Among the endorsements from the candidates eliminated in the first round, Dilma only (kind of)  picked up one. Leftist (PSOL) candidate Luciana Genro who had received 1.6 percent of the vote recommended her followers to vote for Dilma or to vote blank.

This is all peanuts of course compared to the big one: The endorsement of Marina Silva and that of her party, the PSB. For this one it is important to remember that Marina only joined the PSB a year ago, when it became clear that she would not be able establish her own party, Rede Sustentabilidade (Sustainability Network) in time for the election. 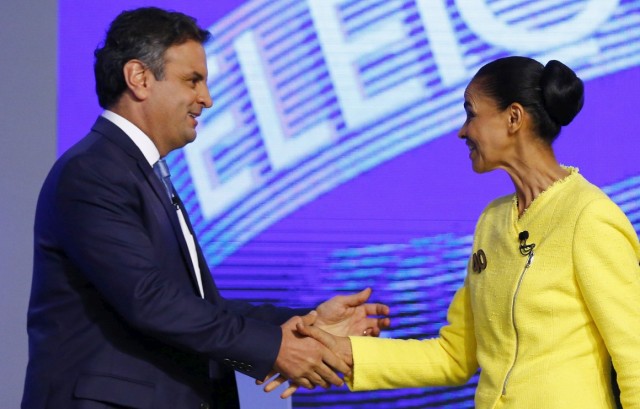 The PSB did endorse Aécio a few days after the election but essentially fell apart in the subsequent days. While the majority of the party leadership, including the important Pernambuco fraction, allies of deceased candidate Eduardo Campos, opted to support Aécio, the party president dissented and declared his support for Dilma.

Marina on the other hand, took her time asking for program concessions from Aécio such as the adoption of her position against reelection of presidents. In the end, she only got some wage commitments on environmental and indigenous issues but still endorsed Aécio, citing the need for change.

This is a clear win for Aécio and a blow to Dilma. Dilma’s destructive campaign against Marina backfired as it pushed Marina to endorse the anti-PT camp.

It remains to be seen how much this endorsement matters. It was somewhat lukewarm in the sense that Marina took her time, she will not actively campaign for Aécio and her constituency appears fragmented,  with the Sustainability Network recommending Aécio, blank or invalid. As said before, Aécio needs a clear majority (upwards of 70 percent) of the Marina vote to catch Dilma. Whether or not the endorsement gets him this, who knows?

Finally and unsurprisingly, The Economist magazine also endorsed Aécio for what it’s worth (probably not a lot).

The candidates participated in two TV debates  this week. There will be another one on Sunday and a final one three days before the election.

As was to be expected, the tone is getting increasingly harsh, with mud and accusations flying high in both directions (recent topics: Aécio’s sister, Dilma’s brother, drunk driving). Will this make a difference for undecided voters? Probably not as the ones who typically watch this stuff have their minds made up already.

The issue most talked about after Thursday’s debate was non-political: Dilma’s near-faiting due to a sudden drop in blood pressure during a post debate interview.

So what will decide the election now in the final days?

The case for Aécio was made recently here by Luciana Guimarães. I still believes that Dilma is more likely to win, if only marginally so. This belief is based on two main factors: Incumbency and class politics.

Incumbents running for reelection rarely loose. This is the case in Brazil (Cardozo, Lula) and also in all other countries in the hemisphere that allow consecutive reelection. The nerds at No Se Mancha could could only find one case in recent Latina American history where an incumbent was defeated: President Hipolito Mejia of the Dominican Republic in 2004 (and he wrecked that country’s economy like Dilma never could).

On class politics, it is simple: Dilma wins among the poor and lower-middle classes which constitute the majority of the population. If her margin in this group is large enough it will overcome Aécio’s advantage among  the better off.

So in my view this is what both candidates will have to do to win:

What Dilma needs to do

#1 Break Aécio’s momentum: Dilma’s aggressive approach worked to break Marina. She will need it to work again. Hit Aécio hard in TV programs, debates, do a bit of character assassination, display him as a playboy who likes to drive drunk. She’s doing it and  it may be working already. His rejection rate increased in recent polls to 38 percent, only slightly below that of Dilma (42 percent). This is a very polarized election!

#2 Play up the long term PT success story and use Lula: Compare the Tucano (PSDB) era (1994-2002) to the PT era (2003 to present). Even though this may be an unjust comparison it just might work. Already a slogan among Dilma supporters: “Those who have lived through the PSDB era won’t even punch 45 (Aécio’s number)  into their microwave oven” (much less the electronic voting machine).

The comparisons between the PT and PSDB eras can even take on a comical character: Compare actress (and former child starlet) Bruna Marquezine (age 19) in the the PSDB era (1990s) and now under the PT: 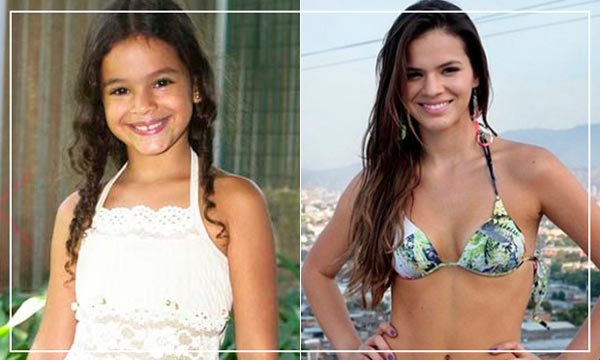 #3 Win the poor, the ex-poor and those in solidarity with the poor. The poor and ex-poor (so-called class C) together make up a clear majority of the population. And they have seen their lives improved most during the 12 years of PT rule.

If Dilma can win them by a clear margin, she will be almost impossible to beat. Using ex-President Lula will help as he’s strongly associated with social progress. At at the same time the campaign appeals for solidarity from the better off. “Don’t be selfish, you’re not voting just for yourself!”

#4 Battle for Marina voters: Many Marina voters are well-educated leftist types, who, while unhappy with the PT, are also not natural PSDB voters. Outline Aécio’s elitism, right-wing record,  lack of commitment to environment and indigenous rights protection, social conservatism. Show that Dilma, flawed as she may be, is a less-bad option for these people.

What Aecio needs to do:

#1. Win most of the Marina vote while staying authentic. He needs to build a broad coalition which includes the more conservative elements of society as well as the greenish and progressive types who voted for Marina and the new middle class on the fence about voting for the PT again. The Mineiro will need to build a big tent to defeat the PT machine.

#2 Win Minas. Much has been set about the fact that Aécio didn’t win his home state in the first round. His record there has been subject of recent debates. Let’s just say winning here will be necessary (but not sufficient) for him to win it all.

#3 Do better in the Northeast. Aécio succeeded in the first round in spite of an abysmal result in this poorest part of the country. The endorsement of the Campos family and Marina who did well here (48 percent in Pernambuco) should help. But the Northeast is PT territory and these voters are clearly up for grabs. He needs to get a good chunk.

#4 Connect with the (lower) middle class.  This is where the election will be decided. Aécio needs to escape the elitist, playboy image. Build connections with ordinary folks and counter the PT argument that electing Aécio will mean a return to poverty:

The narrative Aécio needs to defeat.

He may be on to something in this recent spot mocking a government official who recommended eating eggs instead of meet to escape rising inflation: “I’d rather change governments!”

#5 Shut up Armínio: Armínio Fraga is arguably one of the most respected Brazilian economists, Aécio’s advisor and shadow finance minister. The problem is what plays well in the boardroom looks like the stereotypical financial villain to the folks on the street.

Armínio disappointed (according to the FT!) in a recent debate with Dilma’s finance minister Guido Mantega (who has become a laughing stock among financial types). His cryptic language on the somewhat nerdy topic of the role of public banks has already become PT campaign material:

Aécio should just send him on a 10 day vacation and bring him back after the election (assuming he wins).

It ain’t over till it’s over

Now, we will see shortly if the candidates follow my advice and if it works for them. There probably won’t be a clear favorite until election day. One thing is clear, this will be close and it will be ugly.

João Schlüter is a Brazilian political analyst and insider covering the Brazilian presidential election for No Se Mancha.

1 Response to Brazilection 2014: Don’t faint! This campaign is close and dirty