Posted on November 13, 2014 by Mancha Contributor

Ready for take off?

Brazil’s macroeconomic management will faces four major challenges in the near future. The country would be better positioned to meet these challenges if it had a clear strategy for hot to steer the Brazilian economy back to a growth.

The first major challenge will be the upward realignment of domestic regulated prices in a context of high inflationary pressures. Since the second half of 2012, inflation has remained near or above 6.5 percent—the upper limit of the annual inflation target. The main inflationary factors in recent years – services and non-tradable goods – appear to be slowing down at the margin, but the ongoing correction of regulated prices, until recently repressed, has some way to go.

The difficulties decelerating inflation will be compounded by a second challenge: namely, the pressure on local currency depreciation that will likely accompany the process of normalization of US monetary policy (we expect some increase in US interest rates in 2015). The resultant higher volatility of interest and exchange rates tends to lower the attractiveness of Brazilian securities.

We can assume that the real would already be weaker today were it not for the foreign currency hedge transactions offered en mass by the Central Bank of Brazil since the “taper tantrum” of last year (the nominal value of which has reached US$ 100 billion).

Flows of foreign direct investment have remained stable since 2011, but they have not been sufficient to cover the current-account deficit of the balance of payments since last year, which surpassed 3.5 percent of GDP.

Should some retrenchment in portfolio capital inflows take place, the pressure toward foreign-exchange devaluation will be stressed. The challenge then will become an opportunity for partial recovery of the industrial competitiveness that eroded in recent years, as long as the effects of nominal foreign-exchange devaluations are not unwound by a subsequent acceleration in inflation. 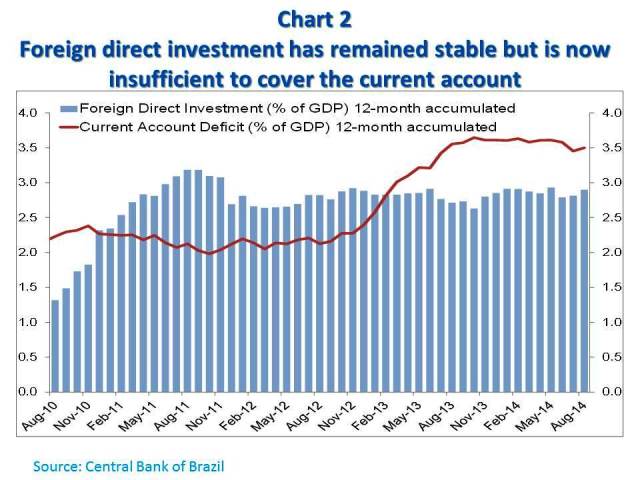 The third challenge will be to respond to such inflationary pressures without resorting to massive doses of monetary tightening in addition to the one already in effect, while those adjustments in relative prices (exchange rate and regulated prices) are underway.

After all, the Brazilian economy is in its fourth year of low growth, with industrial production remaining stagnant at levels close to 2010. Bank credit would have decreased more but for the expansion of public bank portfolios, which today exceed the total lending by private banks. 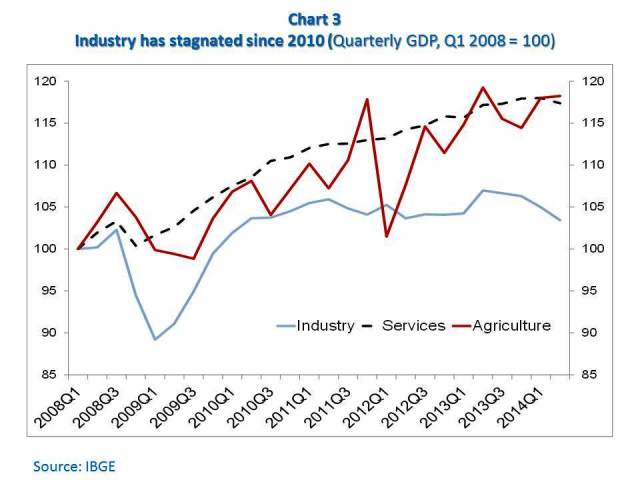 Fiscal policy will be the key to addressing this challenge, insofar as it can reduce the burden of responsibility placed on monetary authorities. The primary public sector surplus has shrunk since 2012 and it is unlikely to reach the target for this year. A reversal of fiscal – and para-fiscal (the injection of funds by the Treasury on public banks) – expansionism would ease the requirement in terms of higher interest rates to control inflation.

Such a revision of the fiscal policy would address the fourth great challenge, which is to reverse the perception of fiscal deterioration of recent years, thus mitigating the risk of losing the “investment grade” ratings of Brazil’s public debt. The current structure of public expenditure is rather inflexible,  so their are limits to very ambitious changes to fiscal targets in the short term. But establishing multiannual targets for primary balances and/or caps on public spending to GDP ratios would enhance the credibility of the fiscal adjustment effort.

Strictly speaking, if the answers to these four major immediate challenges are taken as credible, improvements in confidence and expectations of private agents will facilitate the emergence from current turbulence. This will be so particularly if private investment, in decline since mid-2014, starts to reflect a higher optimism about future macroeconomic performance.

Therefore a plan to a return to growth must be presented upfront. There is now a widespread understanding that systematic increases in Brazil’s “total factor productivity” (TFP) will be needed from now on if the growth-with-social-inclusion that prevailed in the 2000s is to return.

For this to happen, more and better education of workers will be a necessary condition.

However, there are also other areas where Brazil can find sources of increased TFP while the educational improvement materializes.

The first is infrastructure. In addition to its role as gross fixed capital formation, sustainable investments in infrastructure would alleviate bottlenecks that have become increasingly tight in the recent past. The reduction of wasted resources, as a consequence of such investments, would not only cause widespread productivity gains, but also more robust private investment in other sectors.

Key here will be to fine tune the division of responsibilities between the public and private sectors in the investment and operation of the various segments of infrastructure services, according to their different capacities to manage corresponding risks.

Additionally, horizontal productivity gains could be achieved through reforms in various operating parameters of the private sector, namely, those in Brazil’s business environment.

For example, the The World Bank’s annual Doing Business indicates that a Brazilian company today spends, according to the simulation presented in the work, 2,600 man-hours per year just to pay taxes. The average in Latin America and the Caribbean and the OECD are, respectively, 367 and 176.

Building permits take 460 days in Brazil, against 225 and 143 in the latter. These and other similar cases mean that human and material resources are wasted on activities that do not generate value, something harmful to both the competitiveness of enterprises as well as, at the macro level, the TFP in Brazil.

Simplifying the tax system should be, in our judgment, an immediate priority in such a microeconomic agenda, as the bang for the buck in terms of reduction of resource waste would be significant and across the board.

Improving the legal and tax framework in which the labor market operates should also be high on the agenda, as Brazil is a country where, compared to their peers in levels of per-capita income, private companies invest less in the training of its personnel. Disincentives embedded in current tax and labor laws are among the reasons for such underperformance.

The foreign trade chapter of the Brazilian business environment is also noted as unfriendly to investments and technological learning.

Transaction costs and difficulties to access technologies, equipment, and supplies from outside have limited the local scope for innovation, productivity increases, and competitiveness.

Physical investments in logistics infrastructure will bring a positive contribution in this case, but an evaluation of the costs of the complex structure of tariff and non-tariff barriers, which trade protection in the country has become is highly due.

The third area with a great potential contribution to TFP and economic growth, with effects spanning across the previous two, would be a review of public spending. For an economy with a high tax burden and proportion of public spending in GDP such as Brazil, improvements in the quality of the latter have significant direct and indirect impacts.

More generally, international experience has shown how transparency, evaluation of results, accountability, and competition in public procurement reduce corruption and improve the quality of public spending. There is also evidence that the quality of public services (education, health etc.) responds positively to the presence of incentives that reward good performance.

Improvements in the quality of public spending would provide gains not only as a significant part of GDP, but also as part of the production inputs used by the private sector.

Potential gains in TFP to be accrued with the review of public spending go beyond the search for more efficiency and effectiveness. To the extent that one may locate benefits and public subsidies that do not find justification in terms of poverty reduction or needs of the productive system, their elimination would make room for tax reduction or redirection of the corresponding resources.

We therefore have four major short-term macroeconomic challenges and three broad areas of medium-term reform where it is possible to increase the potential for economic growth. Fixing the short term while launching long-term growth foundations will be essential in retaking the course of sustainable development and social inclusion. After all, it is easier to navigate any turbulence when one sees true North to pursue as destination.

This text is based on a presentation by the author at the Brazil-US Business Council (October, 30). A shorter version will appear at the November Bulletin of The Official Monetary and Financial Institutions Forum (OMFIF ). The opinions expressed here are the author’s and should not be attributed to the World Bank.