Posted on March 14, 2013 by Cornelius Fleischhaker

A Latin American Pope – The beginning of change in the Catholic Church? Or more of the same dressed up in a poncho? 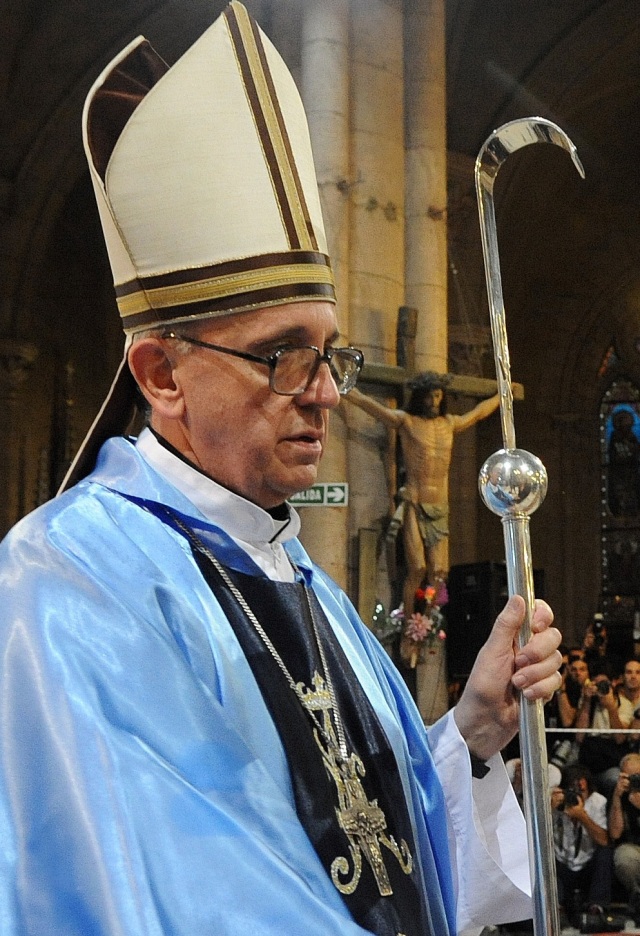 The truth is he never left us

It happened. Latin America’s Catholics, half of the church’s 1.2 billion followers, finally have a pope of their own. Not the favorite, Odilo Pedro Scherer of Sao Paulo but Jorge Mario Bergoglio, archbishop of Buenos Aires who was not named among the promising contenders entering the conclave.

Surly we cannot predict much about the incoming pontiff but a few pieces of information are worth considering. The new pontiff has already made one important decision: Picking his name.  His choice of Francis (Francisco or ‘Paco’ in Spanish) is generally seen as homage to Francis of Assisi, the famously poor founder of the Franciscan order. This would imply a more humble leader of the Vatican, focused on the church’s calling to care for “the least of your brethren”, the poor and suffering.

However, his name might also be in honor of the founder of the Jesuit order, the Spanish saint Francisco de Jasso y Azpilicueta. After all, Bergoglio is not only the first Latin American but also the first Jesuit occupying the Holy See. Jesuits played a crucial role in Latin American history (much to complex to discuss here). They have traditionally been a relatively progressive, earthly and enlightened movement within the church dedicated to the service and education of the faithful.

Franciscan or Jesuit, the image Francis and the cardinals who elected him want to send with their choice is clear: A church closer to the realities and needs of the flock, especially in the developing world. In Argentina, Bergoglio is widely seen as a “passionate defender of the poor and disenfranchised”. His concern for the disadvantaged led him to oppose the neo-liberal policies of former President Carlos Menem along with his no frills lifestyle help to portray this image.

Yet while he might share his views on Menem and economic liberalism with current Argentine President Cristina Fernandez de Kirchner, his devout conservative views have led him to clash with her government on social issues. When marriage was opened to gay people in Argentina in 2010 he called the push a “maneuver by the devil”. Regardless of his concern for the poor, he is also a staunch opponent of Marxist inspired liberation theology, widely seen as the greatest Latin American contribution to Catholicism.

Cristina and the Pope

Most controversially, Bergoglio is alleged to have ties to the disappearances of fellow Jesuits during the Argentine military dictatorship in the 1970s. While a lawsuit was eventually dismissed, the debate continues, with various books and articles contradicting Bergoglio testimony. If this controversy receives international attention now, the church will have yet another scandal on hand.

Controversies aside, by picking a Latin American, the Catholic Church will have a chance to consolidate its largest market in its global portfolio. While Latin America is clearly the most catholic region in the world, evangelicals, Mormons and secularization have increasingly challenged Catholicism throughout the region. In Brazil, the largest catholic country in the world, only 64.6 percent follow Rome while 22.2 percent describe themselves as evangelical. A pope from the region might help the church to halt this loss of market share.

Latin America is home to a plurality of Catholics

Marketing might actually be the best lens trough which to view the cardinals’ decision: By choosing Bergoglio they can improve the tainted image of the church while not changing anything fundamental in terms of values, positions and practices.  It is important to remember that all the cardinals voting in the conclave were appointed either by the conservative John Paul II or his close ally, the even more conservative Benedict XVI. It would therefore be unreasonable to expect them to choose anyone out of line with the traditionalist worldview dominating the Vatican. While these conservative church leaders deny the need for any change in substance, they cannot deny the need to change the church’s image, which might be just what they are trying to achieve.

However, Cardinals, unlike Popes, are not infallible.

Though they might be trying to change the packaging while keeping the content unshaken, the Pontiff with his near absolute power and dogmatic infallibility has great ability to shape the church. What Jorge Mario Bergoglio, now known as Francisco, Francis (or even Paco) has in mind for the faithful in Latin America and across the world, well, only the all-knowing can tell.