Justice At Last in Brasilia

Posted on November 20, 2013 by Mancha Contributor

Joel Covelli on corruption and justice in Brazilian politics

Blinded by the light?

This past week, in a watershed moment in Brazil’s political and legal history, eleven politicians that were convicted and sentenced last year on corruption charges turned themselves in to federal authorities in Brasilia to begin serving their prison sentences.

The mensalão decision was hailed as a national triumph with Chief Justice Joaquin Barbosa attaining celebrity status.   However, in September of this year the Supremo Tribunal Federal granted appeals to those convicted, which included top officials from Lula’s administration.

For many, the granting of appeals—of a trial already decided in country’s highest court—was one more example of how the rich and powerful remain above the rule of law in Brazil.   Nevertheless, last week the court dismissed the appeals as “procrastinatory” before ordering those convicted to begin serving prison time immediately.

Among those now behind bars, is Lula’s former chief of staff José Dirceu, who was convicted for a term of ten years and ten months. So the so-called “mensaleiros” are reportedly housed in six meter-square cells and have cold water showers; this not luxury- prison. 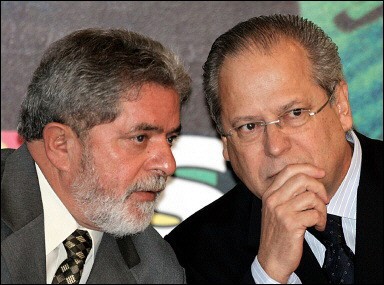 Did he say cold water?!

The PT and Dilma

The PT had long held a reputation for cleaner more accountable politics; this helped propel Lula’s rise to power in 2002 as he pledged to stamp out corruption and clientalism.

Although Lula delivered sustained economic growth and greater social inclusion, the hopes for clean and transparent government were dashed with the revelation of the mensalão.  Lula evaded implication in the mensalão scandal (which surfaced in 2005) and remained immensely popular—being re-elected in 2006— before handpicking Dilma as his successor in the Planalto in 2010.

Since assuming the presidency Dilma has presided over an unprecedented faxina (house- cleaning) of Brazilian politics.  Dilma has dismissed six of her ministers, including her chief of staff, upon revelations of corruption. In 2010, Dilma also passed a ficha limpa (clean record) law that bar congressional candidates for eight years after a corruption conviction.   These moves resonated with Brazilians as Dilma saw an immediate spike in her approval rating.

Another important accomplishment was the passage of a Freedom of Information law, which produced jaw-dropping disclosures. For example, 168 employees in a São Paulo auditing court were being paid monthly salaries ranging from the equivalent of $12,000 to $25,000 (more than São Paulo´s mayor).  Meanwhile, one state judge in São Paulo made an incredible $361,500 in a single month.   In contrast, most public schoolteachers earn a monthly salary of $1000.

The steps taken by Dilma and the Supremo Tribunal Federal to clean up Brazilian politics have shattered the popular conception that political impunity was as inherently Brazilian as futbol or feijoada.

Along with the poor quality of public health and education, political corruption was atop the list of grievances that brought millions of Brazilians to the streets in the largest protests in the country’s democratic history this past June.

In response to the public outcry, Dilma proposed a constituent assembly that would provide for political reforms but this was rejected as unconstitutional.  She then proposed a plebiscite to see if voters would be in favor of a constitutional assembly to overhaul the political system. This has yet to materialize.

In September, Dilma successfully signed into law a measure that earmarks 75 percent of royalties from the Pre-salt oil fields for education and 25 percent for education.

For its part, Congress responded to the public outcry and abandoned a constitutional amendment (PEC 37) that would have curtailed the power of federal prosecutors to investigate allegations of political corruption.   Then, in early September, Brazil’s Chamber of Deputies voted to eliminate secret voting in both houses of congress (a bill that had been proposed seven years ago but had since languished in the lower house).

In a classic example of the disconnect between ordinary Brazilians and the political class, in the midst of the protests, the speaker of the chamber of deputies Henrique Alves used an Air Force plane to escort himself along with friends and relatives to the final match of the Confederations Cup between Brazil and Spain.   It was also revealed that the Governor of the state of Rio de Janerio, Sergio Cabral has a daily commute to work that consists of a chauffeured car to a heli-pad followed by a whopping three-minute chopper ride. Responding to a reporter, Cabral remarked, “I’m not the first to do it; others in Brazil do it, too. And it’s ok because of the job I have. I’m not doing anything new”.  Not coincidentally, there have been sustained “occupy style” protests in front of Cabral’s Governor’s residence in Leblon.

Although Dilma’s approval rating plummeted in the aftermath of the protests, it has since rebounded and she remains the favourite for the 2014 elections.  By making clean government a hallmark of her presidency, the final order to put PT officials behind bars could bolster Dilma’s image as a champion of anticorruption and in turn help her bid for reelection.

In the run-up to elections, Dilma will need to convince Brazilians that her government is up to the task of ensuring that public funds are spent on schools and hospitals rather than the expensive tastes of the political class.  With the World Cup on the horizon, all eyes will once again be on Brazil; it promises to be an exciting 2014.

Also by Joel
Argentina Misunderstood?
The Roar of a Nation