Stop the Presses! Ecuador’s new plan to save trees 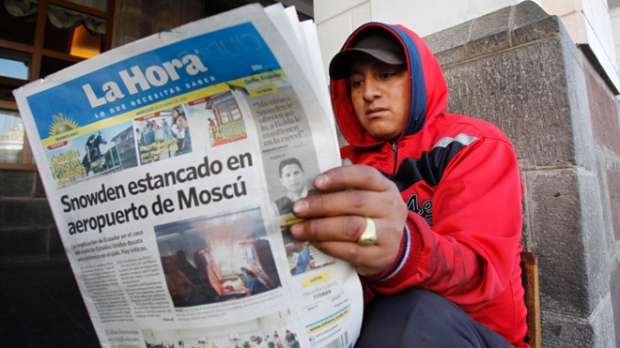 There’s an app for that

Recently the world showed its apathy toward the environment when Ecuadorian President and champion of sustainable development Rafael Correa was rebuffed on his noble effort to preserve the rainforest.

It was a sad day for trees everywhere and a telling statement about what real value the west puts on environmental concerns. For a mere US$3.5 billion or roughly ¼ of what was misplaced by the US government during the Iraq war, one of the most diverse and verdant ecosystems in the world could have been saved.

Correa had offered to spare Ecuador from deforestation—but he asked that his country be compensated for foregoing its comparative advantage in wood. Since then, west has not shut up about environmentalism. But is has also not put up.  Ecuador raised one fifth of one percent of the requested sum.

Despite this rejection, Correa will not be deterred. Just last week he continued his one-man crusade to save the trees by suggesting that Ecuador’s daily newspapers shift to an online format only, ending the wasteful practice of putting out dead-tree versions.

This is not the first time Ecuador has championed the cause of paper reduction: It was one of the first western hemisphere countries to do away with the expensive and redundant practice of producing a domestic currency and instead entered into a currency sharing partnership with the US (albeit an effort that held certain monetary stability spillover effects as well).

By cutting down on the amount of paper we wantonly discard, perhaps the loss of rainforest land can be offset.

The naysayers claim that by moving to a digital-only format, Correa not only has an easier time controlling what is disseminated, but also who gets to read it.

Cynics are calling it a political move to suppress criticism, but this is the same country that granted Julian Assange asylum so Correa may not be completely against freedom of speach.

Even without a print version, WikiLeaks has no shortage of readers and supporters.

Maybe Rafael Correa is sending a signal to the world that Ecuador plans to be at the vanguard of the digital media movement. This can be an opportunity for technology giants like Microsoft, Google and Apple to finally step up to the plate and provide internet access to an entire country.

At the moment, only 20 percent of the Ecuadorian people have access to the internet and research shows that people use it for many other things before news. Such behavior is not unique to Ecuador: The most popular global news site sina.com.cn is only the 16th most visited site on the web and in fact only 2 of the top 50 most visited websites are news based. (On a side note, what people use the internet for is fascinating)

But maybe eliminating print dailies will force people to modify behavior? The same argument has been made about alternative energies. People will never really use solar, wind and other alternative energies as long as fossil fuels are still available and far less expensive. As access to fossil fuels is restricted, other sources become more appealing.

Maybe Correa’s actions will have the same effect on news.

Whatever the true motivation for Correa’s actions, if the end result is that the Huaorani people are given access to the internet, cellphones, and twitter, aren’t we all better off?

“…so I told him we have enough characters in the tribe already. We don’t need 140 more.”

1 Response to Stop the Presses! Ecuador’s new plan to save trees